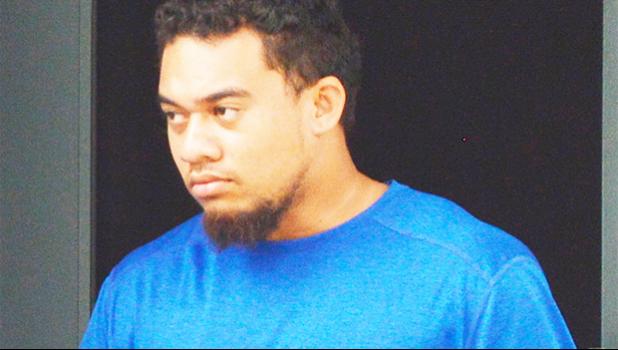 He says he learned the practice from a former OMV employee who did the same thing
By
Ausage Fausia
ausage@samoanews.com

Pago Pago, AMERICAN SAMOA —  An employee of the Office of Motor Vehicles (OMV), a division of the Department of Public Safety (DPS), who is accused of providing forged commercial driver’s permits to several local drivers was arrested this week.

Matthew Tafua made his initial appearance before District Court Judge, Fiti Sunia yesterday morning, pursuant to an arrest warrant signed by the court. He is charged with two counts of forgery and two counts of acceding to corruption, both felonies.

Judge Sunia established Tafua’s bail at $10,000. If he posts bond, the court has ordered that he remain law abiding, and he is not to leave or attempt to leave the territory. He is also ordered to make all of his court appearances, and he has to surrender his travel documents to the government’s attorney. Furthermore, Tafua is not to make any direct or indirect contact with all the government’s witnesses.

Tafua is scheduled to appear in court this morning for a Status Hearing.

The government claims that on Sept. 15, 2018, three police officers were patrolling the main highway in Nu’uuli when they received a radio transmission from DPS Commissioner Le’i Sonny Thompson requesting assistance concerning a vehicle stop in front of a restaurant in Nu’uuli, where an aiga bus was pulled over for expired registration.

Detective Filemoni Amituana'i, the lead investigator, had to determine and re-confirm with the registration system at Central dispatch, the validity of the tags on the license plate for the bus.

Dispatch’s response was that the license plate tags are valid and do not expire until Sept. 30, 2018.

A check of the driver’s permit, to include his private driver’s license and his commercial driver's permit, revealed the driver as Gasolo Gasolo

But the authenticity of Gasolo's commercial driver's permit was questioned.

The commercial permit he produced was handwritten and was not properly signed by the manager of OMV. When questioned by police, Gasolo admitted that he was in possession of a forged commercial driver’s permit that was fixed and given to him by OMV employee Matthew Tafua, the defendant is this case.

Gasolo was further questioned at the Tafuna Substation where he provided a written statement.

According to Gasolo, he recalls that on July 17, 2018, he went to the Tafuna Substation to meet with a DPS officer to check the test scores for his commercial driver’s license. He said he was informed by the female cop that he did not pass the test but his name was being submitted for the next class.

Gasolo told investigators that on the same day, he met with Tafua outside of the Tafuna Substation, and that's when he shared his story with the OMV employee, telling him he needed help obtaining a commercial driver’s permit.

Gasolo claims that Tafua immediately offered to help, but it would cost Gasolo $60.

Gasolo said the very next day, July 18, 2018, he gave Tafua $60 at the OMV and in return, Tafua handed him a yellow commercial driver’s permit.

The bus driver claims that on the following day, he accompanied his friend Sautia Fiti to the OMV where he witnessed Sautia give Tafua $60 in exchange for a commercial driver's permit in Sautia's name.

When questioned by police at his home in Faleniu, Fiti confirmed Gasolo's story. He told police that he did not attend any commercial license classes but it was Gasolo who assisted him in the process, whereby he paid $60 to Tafua for a commercial driver's permit.

The female officer who informed Gasolo that he did not pass the license test told investigators that she encountered a bus driver by the name of Fiti during a roadside inspection at the market area in Fagatogo on July 11. She said that upon close examination, she noticed that his commercial permit was forged — specifically, it was not signed by the OMV manager.

She said Fiti told her the permit was 'fixed' and given to him by Tafua, who works at OMV, and he even admitted to her that he never attended any of the commercial driver classes held at OMV.

When confronted by police on Sept. 17, 2018, Tafua agreed to answer questions and provide a written statement. He was presented with evidence of what was discovered during the course of the investigation.

When asked about the motive behind his actions, Tafua said he learned the practice from former OMV employee Sam Kolone, as a way to make some extra money, given his “constricted paycheck”.