Officer testifies that he feared for his life, so he fired his weapon 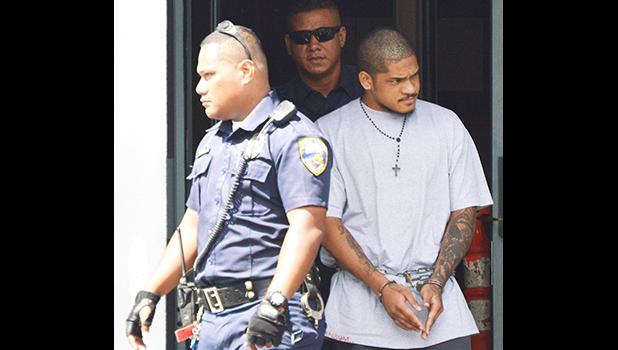 Pago Pago, AMERICAN SAMOA — It was revealed during Day Two of Manu Lefatia’s jury trial that ‘warning gunshots were fired’ by one police officer during a confrontation with Lefatia in Vaitogi — in an effort to get Lefatia to comply with his command.

Moreover, government witnesses identified Lefatia as the driver of the red truck that took police on a high-speed chase that day.

Lefatia, who has been in custody without bail since his arrest in Jan. 2018 is charged with first-degree assault and resisting arrest, both felonies, and third degree assault, a class A misdemeanor.

The government called several police officers to the stand, including Det. Justin Thomsen and Special Agent John Seumanutafa, who was the lead investigator.

Thomsen told jurors that he and Capt. Lima Togia were in a police unit, at the three-corner intersection on the road to Vaitogi and the Iliili Golf Course, when they observed a red truck heading west at a high rate of speed.

According to Thomsen, the red truck was traveling approximately 70 mph from Iliili, towards the direction of the airport. Other cops were dispatched and several police units assisted in the chase.

Thomsen said they tried to inform the driver to stop the vehicle; but the red truck continued to speed, overtaking 2 to 3 cars in front.

When the truck reached the roundabout at Fagaima road, it turned left and continued to the four-way intersection in Fagaima, and turning left again, it headed towards Fatuoaiga road and at one point, according to Thomsen, it stopped in front of a new store on the Fatuoaiga road. Several police units had made their way to the same parking lot.

Thomsen testified that it was officer Satia Leulu who stepped out and walked towards the area where the red truck was parked, attempting to speak to the driver. At the same time, the red truck began slowly moving; and as officer Leulu tried to approach the vehicle, it accelerated and sped off, nearly dragging Leulu.

The chase then resumed and continued to the main road, and that's when police lost sight of where the truck was heading.

However, as police units were patrolling the Vaitogi area, Thomsen told jurors that several pedestrians flagged them down to tell them that the truck went to Vaitogi.

Thomsen and Capt. Togia made their way to Vaitogi where they observed the truck moving slowly on the grass field next to the ocean.

The police unit blocked the road and Thomsen exited. He walked towards the driver while Capt. Togia was on the radio, notifying his colleagues about the situation.

“I saw the driver. I recognized him. He was Manu Lefatia,” Thomsen said. There was another male in the passenger seat, whom Thomsen said was moving around a lot, as if he was looking for something. Thomsen said he was concerned for his safety.

“While I was trying my best to command the driver to turn off the car and stop, the male in the passenger seat continued to make a lot of movements inside the car. At one point, it appeared that he was holding something in his hand, but I couldn’t see it, because his hands were blocked by the dashboard. It was at that time that I drew my weapon in a low ready position,” Thomsen told jurors.

He said he continued to yell at Lefatia to stop the car, and at one point, he used profanities in an effort to get Lefatia’s attention. But Lefatia didn't budge. Instead, he moved the car towards Thomsen and it nearly hit the officer's knee.

Thomsen said the car stopped a few feet away from him, and that's when he saw the male passenger standing up from his seat and facing him. He said the passenger's hands and shoulders were in a position as if he was holding something.

Out of fear, Thomsen said he fired a second warning shot.

Immediately after, the passenger sat down and the vehicle sped off — again. That was Thomsen's last encounter with the red truck.

According to Seumanutafa's testimony, at around 1:20 am on Dec. 24, 2017, while he and 4 other officers were in a police unit stationed in front of the Veterans Stadium, they got a call about a red truck speeding from Iliili, heading to the airport.

Seumanutafa said they moved their unit and parked it in front of Tafuna Mini Mart. A few moments later, they saw the red truck coming towards them, followed by a police unit.

“I thought the red truck was going to stop; however, that wasn't the case. The vehicle continued to travel at a high rate of speed and it overtook several other vehicles on the road,” Seumanutafa told jurors

He said when the truck sped by they followed it.

The trial resumes at 9 am today.