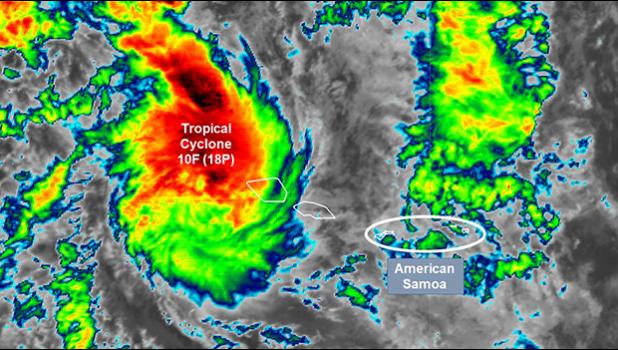 Winds are forecast to increase later tonight and into Saturday morning for American Samoa. Also, rain is expected to be heavy and consistent at times which could trigger additional mudslides throughout the Territory. Seas will build to dangerous levels overnight.

Again, kindly reminding of the difference in terminology between the 2 Samoas with similar wind range. A tropical storm is a tropical cyclone.

TROPICAL WARNING CONTINUES TO BE IN EFFECT FOR AMERICAN SAMOA.

SATURDAY...Tropical storm conditions expected. Mostly cloudy with numerous showers and thunderstorms. Highs in the low to mid 80s. Damaging north winds 40 to 60 mph in the morning, becoming
northwest and gradually diminishing to 15 to 25 mph through the afternoon.

SATURDAY NIGHT AND SUNDAY...Mostly cloudy with scattered showers and thunderstorms. Lows in the upper 70s. Highs in the mid 80s. Northwest winds 15 to 25 mph.

SUNDAY NIGHT THROUGH MONDAY NIGHT...Partly cloudy with isolated showers. Lows around 80. Highs around 90. Northwest winds 15 to 25 mph, becoming north 10 to 15 mph on Monday.

TUESDAY THROUGH FRIDAY...Mostly cloudy with scattered showers and isolated thunderstorms. Highs in the upper 80s. Lows in the upper 70s. Northeast winds 10 to 15 mph, becoming east 10 to 15  mph on Friday, Feb. 28.