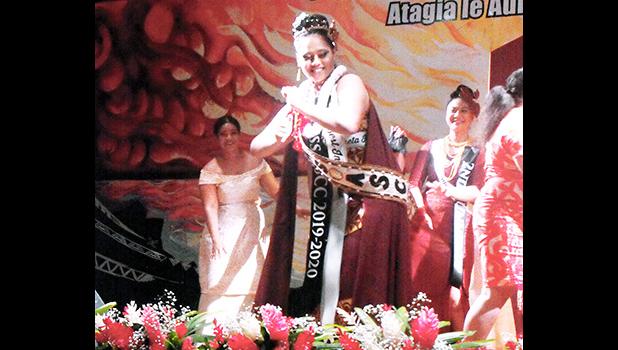 Pago Pago, AMERICAN SAMOA — As the fall 2019 semester at the American Samoa Community College (ASCC) winds down, the newly-crowned Miss ASCC for 2019-2020, Apoiliu Atuaia, looks forward to her reign as an opportunity to provide her fellow students with more opportunities to succeed in their scholastic pursuits, while also encouraging them to have more involvement in community service.

“I hope to use my position to be a role model and implement more programs and opportunities to aid the students in their academic endeavors towards a sound and successful career,” she said. “Also, I hope to work with the Student Government Association to help our student body become more passionate about participating in school academics and events and also working in our community. Anything that I can contribute to bettering our school, experience, community, and so forth, I want to do.”

Atuaia, currently a Nursing major, plans to complete her Associate of Science degree in that field at ASCC before transferring off-island to pursue a Bachelor of Science in Nursing. “My end goal is to become a Nurse Practitioner, and from there, God willing, take another step higher as a doctor,” she explained. Atuaia belongs to the ASCC chapter of the prestigious Phi Theta Kappa (PTK) honor society, her official sponsor for the Miss ASCC competition.  She describes the PTK as “a wonderful opportunity to challenge your academic work ethic and to be involved in our community.”

The new Miss ASCC comes from a multi-cultural background typical of many young Samoans today. Born in Honolulu, Hawaii, at age 4 her family moved to Vancouver, Washington, where they still reside. Her father, Tuu’u Viti Atuaia, comes from Independent Samoa, while her mother, Lily Mata’utia Atuaia, has roots here in the territory. As a youth, Atuaia’s only experienced American Samoa briefly at age 7, when she spent a year living here with her grandparents. Other than that, she grew up in Hawaii and Washington.

She completed her secondary schooling as part of the Class of 2018 of Union High School in Camas, Washington. As a graduation gift, her grandparents Rev. Isa’ako and Loretta Mata’utia brought her back to American Samoa. “They suggested that I take classes at ASCC as a first step in my career path,” she recounts, “even though I had already enrolled at the University of Utah in their Nursing program. I agreed, as I understood that school would be less costly here while I could still begin my training towards being a nurse. My parents and 3 younger siblings still live off-island in Washington. I visit them as often as I can, and they’re the big reason I felt compelled to give my all in this pageant.”

She recalls that at first she had no particular wish to run for Miss ASCC. “I wasn’t always interested,” she admits, “but I later saw the value of earning the privilege of leadership, having a platform, and acting as an advocate and voice for our students and teachers. In addition, my aunt Lorisa, a former Miss American Samoa 2009 and now a professional nurse, inspired me to take that step. I also had so much support from family and friends who had faith in my abilities, and I sought to make them all proud. The process of running in a pageant became intriguing, and I had fun with all of the preparing and performing.” Atuaia also benefited from the experience of designer Keniseli Fanuola, “a sort of coach”, who brought his artistic touch to her traditional and formal wear, and guided her through the pageant process.

On the night of the pageant, Atuaia went up against spirited competition from 1st Runner Up, Theresamarie Paul; 2nd Runner Up, Iaeli Faifili; 3rd Runner Up, Jemisa Vaka; and 4th Runner Up, Marie Sefo.

When the judges announced their final scores in the various categories of competition, and Atuaia emerged as the winner, she received the ceremonial crown and sash from ASCC president Dr. Rosevonne Pato and Dean of Student Services Dr. Emilia Le’i before performing her victory siva and greeting the customary wave upon wave of family, friends and supporters offering their congratulations.

With the pageant now behind her and final exams following closely on its heels, Atuaia can now focus on fulfilling the goals which prompted her to compete. “I do not plan to take the title lightly,” she says. “I believe this is a very important opportunity to work to better our school for our students.”

ASCC policy states that the Miss ASCC titleholder needs to follow a defined set of personal and academic standards. Miss ASCC acts as a representative of the College at official ceremonies, and must have an awareness of social and cultural protocols. The titleholder also serves as an honorary member of the Student Government Association (SGA), which operates under the College’s Student Services Division.