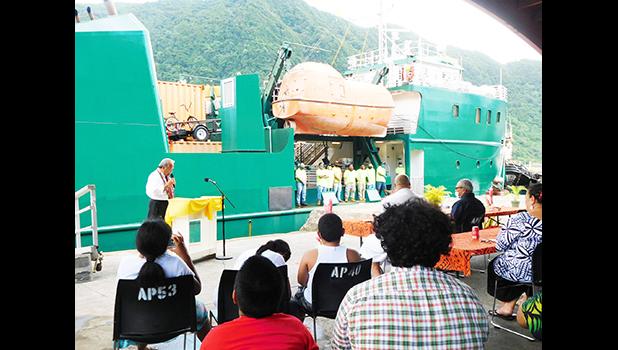 Sail to Manu’a postponed to next month
By
Fili Sagapolutele
fili@samoanews.com

Pago Pago, AMERICAN SAMOA — The nine-member crew of the MV Manu’atele — which sailed into territorial waters over the weekend — are in quarantine and will be released at the end of this month, says Port Administration director, Taimalelagi Dr. Claire Poumele, who points out that this week’s sail to the Manu’a island group is postponed to next month.

Health officials told Samoa News that the crew was short the 14-day quarantine requirement when the vessel arrived here and being in quarantine would complete required days.

The ASG-owned multi-million dollar vessel sailed to Honolulu in June for repairs at the Honolulu-based Marisco Inc., shipyard and sailed to the territory on Dec. 17th. The vessel sustained damage at the Ofu Wharf during bad weather earlier this year and the US Department of Interior allocated $1.6 million for repairs to the vessel.

The crew was tested for COVID-19 by Health Department that afternoon and  “the results are negative,” she said.

Taimalelagi told Samoa News last week that all the crew was tested in Hawaii for COVID-19 and the results were negative. And copies have been forwarded to [ASG] Health Department.

Furthermore, the crew has a NCIT100 Hawkeye Non-Contact Infrared Thermometer and has been conducting daily temperature tests and keeping a log. Additionally, the crew had been living on the vessel for two-weeks prior to departure from Honolulu.

“Public Health has dictated that the crew be quarantined at the Tafuna Center until December 31st.  The crew is unable to unload the cargo or clean the vessel,” Taimalelagi told Samoa News this week. Therefore, she said the trip that was planned to Manu'a this week has been postponed until January 13th.

“The crew ,which has been in Hawaii for six months were blessed to have not been infected with the virus.  They have been tested twice and the results are negative.  They are anxious to be with their family since they missed Christmas,” said Taimalelagi.

Asked about the cargo, she said that the US Coast Guard — which inspected the vessel after repairs were completed — would “not allow commercial cargo” for the sail and therefore cargo on the vessel from Honolulu includes personal items for the crew as well as needed equipment for the vessel.

The MV Manu’atele finally sailed into Pago Pago Harbor at 11:30a.m, this past Sunday, Dec. 27th and anchored at the inter island dock to await the start of the ASG sponsored prayer service and welcoming event on the dock.

Family members of the crew were also in the audience, as the governor during his remarks thanked the crew — who stood on the first-level of the vessel, looking onto the main dock.

The governor also thanked many individuals including Taimalelagi who offered remarks and expressed appreciation to the crew as well.