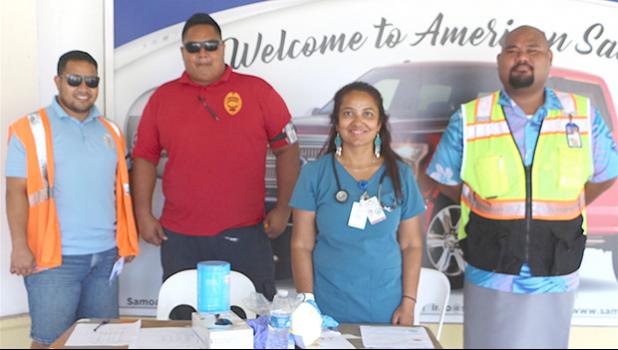 The youngsters entered the territory from Samoa via the Lady Naomi two weeks ago
By
B. Chen
blue@samoanews.com

The measles epidemic in neighboring Samoa continues to make headlines in the Pacific Region. And while measures have been taken by the local DOH to set up checkpoints at the territory’s points of entry (Fagatogo wharf and the Pago Pago International Airport), Samoa News was informed by DOH this week that there are two travel-related suspected measles cases — from the same household — who have been isolated at the LBJ Medical Center since Sunday, Nov. 11th.

According to DOH, the two cases are young kids, both under 5 years old, who traveled from Apia via the Lady Naomi, arriving in Tutuila on Halloween, Oct. 31st. “All passengers were screened at the docks on this day, but none reported” experiencing any signs and symptoms of measles when the DOH team asked them at the wharf, said DOH.

However, a week after their arrival, the two kids were seen at the LBJ Hospital because “they were now experiencing rash and fever,” according to DOH, which carried out “contact tracing investigations immediately, once notified.” Children from the same household as the two suspected cases — who were not immunized — have been vaccinated.

DOH is asking the community to check the immunization cards for the little ones and if unsure of their status, call the hotline at 633-5871/5872 or stop by the Fagaalu Well Baby Clinic or the Tafuna Community Health Center. All eligible individuals are babies 12 months or older. Babies 6 months or older are eligible for an MMR shot “if they are traveling.”

“We are asking the public to stay calm,” DOH emphasized, adding that they have enough vaccine shots “for all our children who are not fully immunized. All we ask, is that you bring them to get vaccinated.”

“The Department of Health is taking all necessary precautions and measures to ensure our families and borders are protected. For those who will be sponsoring individuals from places with a measles outbreak such as independent Samoa, Tonga, Fiji, New Zealand, make sure they are fully immunized before processing their permits to travel here to American Samoa,” DOH urges. “This is to protect all of us here in American Samoa, especially the most vulnerable populations at risk, such as pregnant women, infants, and young children.”

The public is advised that the Leone and Amouli Community Health Centers will be closed for the next two weeks, due to a shortage of nurses. Only the DOH clinics in Fagaalu and Tafuna will remain open 8 a.m. - 6 p.m. Monday to Friday. The Tafuna Well Baby Clinic will also be open on Saturdays from 8 a.m. - 12noon.

This past Tuesday, Samoa News witnessed over 100 little ones at the Tafuna Clinic, waiting in line — for hours — with their parents/ guardians to get their MMR shots. Some families were there for well over 6 hours waiting, while DOH employees tried to get everyone squared away.

Schools have been notified that kids whose immunizations records are not up to date — specifically for the MMR vaccine — are not to be admitted until they get their shots.

“If you or any of your children are sick, please stay home,” DOH advises. “A DOH team will be deployed to your home to assess and determine if you need home care and remain isolated from everyone until you are well, or need to be transported to the hospital if developing complications.”

Clinical Director of the Community Health Centers, Dr. Saipale Fuimaono explained, “Measles is a highly contagious and potentially severe disease, which initially causes fever, cough, red watery eyes, and finally, a rash… Measles is spread by air and by direct contact, even before you know you have it. The MMR immunization is very effective — with a 97% success rate — to protect yourself and to prevent the unintentional spread of this potentially serious infection to others.”

Measles spread easily through air droplets when an infected person breathes or coughs. “DOH records show many of our school-aged children are not up to date with their measles vaccine, putting them at risk,” DOH points out. “All schools and daycare centers have received a list of children with missing or incomplete records of MMR vaccines. These children will be sent home and not accepted back to school until they complete the two doses of MMR at the community heath centers.”

DOH encourages all adults traveling to any of the countries with measles outbreak to check if they are fully immunized. Pregnant women cannot be vaccinated for health reasons and therefore, are asked not to travel to areas with a measles outbreak.

Anyone with symptoms of measles is advised to visit the community health center immediately or call the aforementioned hotline numbers.

Yesterday, Nov. 13th, Governor Lolo Matalasi Moliga declared that “a public health emergency exists,” and he authorizes DOH “to utilize all necessary powers under the American Samoa Emergency Health Powers Act to contain and prevent the imminent risk of a measles outbreak.”

In his declaration, Lolo said “this emergency declaration extends to the entire territory of American Samoa, including all islands, all ports, all waters, and all areas subject to the control of the American Samoa Government.”

The duration “of this public health emergency shall be thirty (30) days, and shall be extended if necessary upon consultation with the director of the Department of Health.”

Effective immediately, Lolo wrote, “all visitors entering American Samoa through the independent state of Samoa or the Kingdom of Tonga must provide proof of MMR (measles) immunization, or proof of MMR (measles) immunity as a condition of entry. Any visitor who fails to provide such proof on arrival will be denied entry and placed back on the arriving vessel to be returned to the point of origin.”

All American Samoa residents traveling to affected countries “will be subject” to DOH screening policies “to ensure compliance with measles vaccinations at all ports of entry.”

UPDATE FROM THE REGION

Thursday afternoon, Radio New Zealand reported that two flights from Samoa to Auckland over the weekend were carrying passengers with measles, according to Auckland's Regional Public Health Service.

The measles virus is said to have been brought to Samoa from New Zealand and now it has reached Tonga (where all government primary schools and kindergartens are closed until Nov. 25th) and Fiji, where six people were quarantined earlier this week.

In Samoa, the total number of suspected measles cases has climbed to 513 as of last week, with results still pending from an Australian laboratory regarding the recent deaths of two infants and an adult male who showed clinical signs of the disease.

For now, the Samoa Government has closed all schools and canceled graduation ceremonies and end-of-year prize givings as it works closely with the World Health Organization, UNICEF, the New Zealand government, and an Australian medical laboratory to contain the epidemic.

The public is advised that symptoms of measles usually develop 10-12 days after exposure to an infected person and can last 7-10 days:

At 2-3 days after symptoms develop, tiny white spots (Koplik Spots) may appear inside the mouth.

At 3-5 days, a rash breaks out, usually beginning on the face at the hairline, spreading downward to the neck, trunk, arms, legs, and feet.