“Many Overstayers” highlight of confirmation hearing to Immigration Board 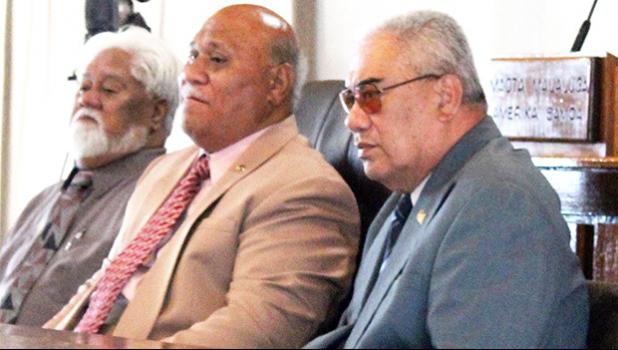 The public statement comes amid the growing number of overstayers who are discovered when they appear in court for criminal cases. However this specific issue — criminal overstayers — did not come up during the confirmation hearing for Fa’amausili, along with ASG Office of Property Management director Niumata Malo and Rep. Gafatasi Afalava, who appeared before the Senate committee yesterday for their confirmation hearing as members to the Immigration Board.

Fa’amausili and Gafatasi are both re-appointed for another two-year term each, while Niumata is appointed to a five-year term. Fa’amausili is the governor’s appointee to the board representing the Senate, while Gafatasi represents the House.

At the start of the hearing, Sen. Fonoti Tafa’ifa Aufata inquired about the many Asians in American Samoa, and Gafatasi responded that the board follows the law in approving all foreigners — including Asians  who enter the territory.

Gafatasi said the law doesn’t prohibit Asians from entering American Samoa, as they come in through a special provision of the law to work for local businesses, which sponsor them. Before approving any individual, he said the board conducts a thorough review process that includes a submission of required documents.

Fa’amausili pointed out that the local Department of Homeland Security (ASDHS) is given the name of a foreigner for a background check. And if there is problem, the foreigner is denied entry by the board. He emphasized that all foreigners, not just Asians, wanting to enter the territory, go through a background check with ASDHS.

Fonoti reiterated that there are many Asians living here, saying that the time will come in the future when Asians will take over American Samoa.

He said there are many overstayers in American Samoa, but added that it’s not within the board’s authority to remove them from the territory. He said when such cases are discovered, they are referred to the Attorney General, who works with the Immigration Office to deport the overstayer.

Committee chairman Sen. Tuiagamoa Tavai sought further clarification, asking what the board does to address the issue of overstayers.

Fa’amausili said the board talks to the Attorney General, who, along with the Immigration Office, has the authority to remove an overstayer. Fa’amausili reiterated that the board has no authority to take such action, i.e. deportation.

With so many Asians working in stores on island, Tuiagamoa suggested that the board include another requirement to work here. And that is, the person must speak English.

Samoa News points out that there have been many cases in recent weeks where foreigners, including those from Samoa, have been found to be staying in the territory illegally, and they are only discovered when they commit a crime and end up in court. This issue did not come up during the confirmation hearing for the three men.

All three nominees were confirmed yesterday morning during the Senate session.

In his Sept. 13th letter to the Fono, the governor said the “nominees possess the requisite knowledge and understanding of the role of the Immigration Board in protecting our boarders and preserving opportunities for the people of American Samoa.”