Update: Man threatens mother of his kids and puts a gun to her head 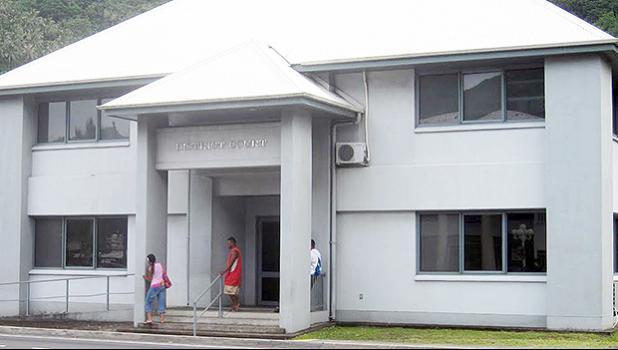 Pago Pago, AMERICAN SAMOA — A man accused of pointing a gun at a woman’s head in the presence of their young children was arrested by police and he’s now in custody. While arresting the man, police found a baggie of methamphetamine on him.

(Samoa News has decided to print the defendant’s name due to his also being charged with unlawful possession of a drug as well as unlawful use of a weapon — aside from three other counts.)

He’s being charged with five counts, including felonious restraint; unlawful use of a weapon, and unlawful possession of a controlled substance (methamphetamine), all class D felonies, punishable by up to 5 years imprisonment, a $5,000 fine or both; along with third degree assault and endangering the welfare of a children, both class A misdemeanors, punishable by up to one year imprisonment, a $1,000 fine or both.

If he posts bond, the court has ordered Faapu’e to remain law abiding, not leave or attempt to leave the territory, and he must surrender his passport to the government’s attorney to hold until his case is over. The court also ordered him not to have any direct or indirect contact with all the government’s witnesses including the victim and her children.

Faapu’e waived his right to a preliminary examination before Judge Patea. He appeared in High Court last Friday for his arraignment where he entered a not guilty plea to all the charges against him.

His pretrial conference is now scheduled for Oct. 4.

On Aug. 26, 2019 around 1:30p.m, several police officers responded to a domestic call that was reported by a woman, who was later identified as the victim in this case.

The victim told police that on Sunday, Aug. 25 around 12:42 just after midnight, she received a phone message and shortly after, her room door was kicked open by her children’s father, the defendant in this matter.

The victim stated that her son and daughter woke up when they heard the loud noise from the door, while Faapu’e forced her cell phone away from her and smashed it on the floor before rushing outside of the room. According to the affidavit, he then came back in the room, pushed her on to the bed while yelling angrily — and all this time the kids were at her side.

The victim stated to police that it was then that Faapu’e pointed a gun to her head and waved it around with threats.

The victim and her children were not allowed to leave the room or call anyone until that morning at around 6:20a.m when she was able to leave for work and take her daughter to Sunday School and drop her off at her Dad’s place.

The victim’s son stayed back with Faapu’e because he told her to leave their son with him.

While driving off to work, the victim heard Faapu’e say, “Don’t go down this road because I will come to your work place and you wouldn’t like it.”

The victim told police that she was afraid for her life and her children’s safety. She said she reported it to the law so that Faapu’e could be removed from her house and she had been asking him to move out since mid July 2019.

Several police officers proceeded to the victim’s home in an effort to apprehend Faapu’e, but couldn’t locate him. Police were told that Faapu’e works at a store in the Tafuna area.

Police proceeded to Faapu’e’s place of work where they located and immediately apprehended him. They searched him before placing him in the police unit.

While officers were searching the defendant, Faapu’e was trying to reach for something inside his left pants pocket. When one officer searched the left pocket, he discovered a small baggie containing white crystalline substance that appeared to be methamphetamine.

Faapu’e was taken to the Tafuna Substation for questioning and the small baggie containing the white substance was tested by DPS Major Lima Togia and it yielded positive for methamphetamine.

Furthermore, Faapu’e told police that the reason why he uses drugs is to calm him down while he’s dealing with some problems within his family. He also stated to police that he has no intention of hurting his family — that he threatened them to get their attention.

With the victim’s permission police searched the victim’s home in an effort to locate the gun. During the search, police located a small hand gun that appeared to be a BB gun (which does not work or function properly). The victim stated to police that it was possibly the gun Faapu’e used during the threats.