Lolo says he will veto some revenue measures passed by Fono 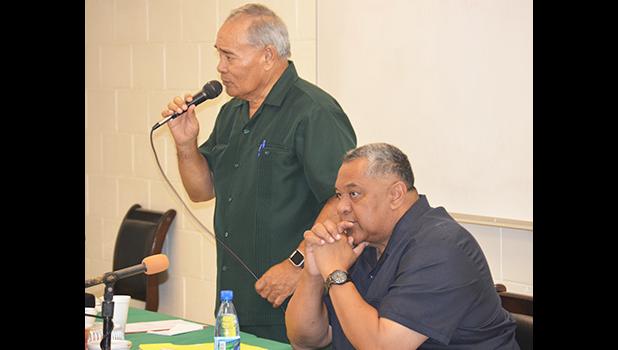 Governor Lolo Matalasi Moliga informed his cabinet during a meeting last week that he's going to veto some of the revenue measures that were passed by the Fono, because he feels a lot of changes need to be made before they are resubmitted to the Fono next year.

The relationship between the Fono and the administration, and the way cost containment measures were handled by senators and faipule, were some of the many issues discussed during the cabinet meeting held at the Department of Agriculture conference room last Friday morning.

Lolo informed cabinet members that they have already met with Fono leaders regarding the revenue measures that were passed by the Fono, as well as those that didn't make it through when the 2nd Regular Session of the 35th Legislature closed earlier this month.

Lolo said that following a meeting with Fono leaders, it appears the Legislature had a difference of opinion and because of that, some measures passed while others were tabled in committee.

He went further to say that the Task Force and the administration failed to do their part when they submitted several revenue measures, which resulted in the Fono having a hard time reviewing them and making a decision.

Lolo said there was strong belief that the Fono would act on the proposed 7% sales tax but "that was not the case."

"Senators and faipule have a different view of what they feel is good for our government,” Lolo said.

He told the cabinet not to blame the Fono and revealed that there are revenue measures he’s going to veto, and they will be amended and resubmitted to the Fono in January 2018 when the Fono reconvenes. (It is unclear which revenue measures Lolo is referring to).

He indicated that he intends to sign only one revenue measure into law, while the rest will be vetoed and sent back to the Fono.

Samoa News points out that the revenue measures the Fono has already passed include the bill to increase port fees and charges, and the bill that establishes the 1% alternative minimum business tax (AMBT).

Lolo said they will work together with the Revenue Task Force on all the revenue measures that he’s going to veto, to ensure the amendments will make it easier for the Fono to review.

“As you all know, the first four months of this Fiscal Year’s first quarter is not an easy time for our government. We can see that we’re still facing financial hardships in every corner of our government and also the business sector. But we have to work hard and work together with the Fono and also the feds, to make sure our government still moves forward, and to avoid any difficulties in the future,” Lolo said, adding that he's already requesting the Department of Interior to advance American Samoa’s allocation for the first quarter of this fiscal year, to make it easier for the government to fulfill its obligations to the people and the community.

“We all know that StarKist Samoa is now closed for five weeks, and we are going to experience some problems because of the cannery shutdown. I guarantee all of you that nothing is going to change in the way our government is run.  We already laid down our plan for this year, the way that we’re going to collect more revenue, and how are we going to serve our people,” Lolo said.

The governor advised all directors to base their spending on the amount of revenue they have, adding that the government shouldn't try to do new things if they feel that collection is very low.

“The good future of our government is in your hands. You are the director, you should know every movement inside your department. You must know your budget and every single action by your employees. You were chosen to be the leader because we trust you and have full confidence that you can make a difference. All of us need to work together, meaning share your thoughts and give us your advice on what we should do to strengthen our government,” Lolo said.

Before the end of the 2nd Regular Session of the 35th Legislature, both the Senate and the House endorsed two revenue measures from the Administration. The Fono also passed the Administration’s FY 2018 supplemental budget.

The House deleted the proposed sales tax as one of the five revenue measures to fund the supplemental budget, and both the Senate and House have opted not to move forward the 7% sales tax, which the administration was looking to collect about $24 million annually from.