Just Asking — Why are some containers inspected piece by piece — and other’s not? 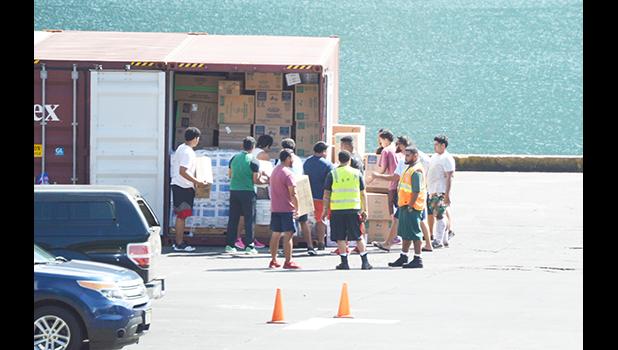 Pago Pago, AMERICAN SAMOA — After a container vessel leaves port, it’s common on the main wharf to see workers and ASG customs agents — as seen in this photo from this past Thursday morning — removing cargo from a container, checking for content. Usually this occurs due to ‘loose’ cargo owned by different companies and consolidated, transported together in one container. The cargo before it’s released to its owner by Customs is checked against the company’s invoice. Each company pays ASG 8% duty fee on the value of its cargo, as well as the fee to Customs for inspecting the cargo. Transportation costs are paid to the shipper.

Containers with cargo owned by one company, and containers that have ‘common’ cargo — soda, beer, etc. are usually hauled away by trailer trucks to places of businesses after going through the X-ray machine inspection.

The Fono recently held hearings about drugs in the territory and asked about  Customs’ process of checking containers coming in, due to the fact that while American Samoa’s borders are closed — except for cargo/ container vessels and cargo flights once a week — drugs continue to flow into the territory.