House hearing probes into the deaths in Auasi to Aunuu channel 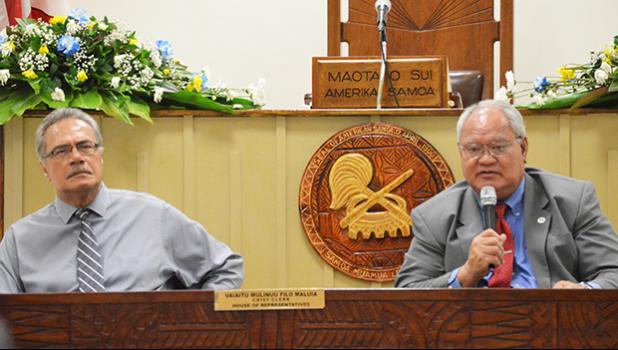 Pago Pago, AMERICAN SAMOA — Two reasons cited for the tragic accident where two men died after an alia carrying passengers between Auasi and Aunuu island capsized in rough waters in June of this year were — not only “the alia was overloaded with passenger” but also “the alia continued carrying passengers from Auasi to Aunuu” despite local Homeland Security suspending transportation on that day due to bad weather.

Le’i and Galea’i were the only two witnesses appearing before the hearing chaired by Rep. Manumaua Wayne Wilson.

In response to questions by committee members, Le’i said an investigation was carried out and it revealed that the boat was overloaded with passengers. He said the issue about transportation for Aunuu is not new and he’s making adjustments that should help avoid further tragic accidents in the future.

Rep. Vailoata Amituana’i suggested that the Department of Public Safety (DPS) should assign two police officers to station at the Auasi wharf everyday to monitor the safety of the people on the wharf.

“Whether it’s good weather or bad weather somebody needs to be stationed at the location to monitor the safety of the people,” said Vailoata. He suggested to Le’i to use one of the Marine Patrol boats for transportation between Auasi and Aunu “only if the weather is bad.”

Le’i said that a police lieutenant along with other police officers are now assigned to the Fagaitua Police Substation and they will be patrolling the eastern area including the wharf in Auasi everyday and especially when the weather is bad to ensure safety regulations are being observed.

He also has given the police lieutenant the authority to make any calls or decisions about whether a boat can sail to Aunuu or not on the days when the weather is bad.

When asked if there’s any way his department can assist DPS in trying to secure the safety of people of Aunu’u, Galea’i told the committee that his office does not have any role in the transportation to Aunu’u. The only role his department can offer is to send out weather reports three times a day, everyday, to law enforcement agencies including DPS, Customs and Port Administration to inform them of the weather conditions.

Rep. Timusa Tini Lam Yuen asked Galea’i whether they sent any weather report to the Port Administration (PA) and DPS informing them about the weather condition on the day of the accident, Galea’i said yes, a weather report was sent over to DPS and PA, along with an announcement to close the Auasi wharf and suspend all transportation between Auasi and Aunu’u.

However, according to Galea’i, the alia operator failed to comply with the public announcement but continued to operate trips between Auasi and Aunu’u, which resulted in the loss of two lives.

Manu’a #2 Representative Tiaoalii Fau Sia rejected Galeai’s comment that his office does not have a role in monitoring the safety of people between Auasi and Aunu’u. Tiaoalii told Galeai that the previous director of DHL, Samana Semo Veavea testified before a house hearing and told members of the committee that it’s the role of his department to make sure people of American Samoa including Aunuu are safe at anytime.

Tiaoalii, one of the alia owners from Manu’a told the committee that it’s about time to stop the talk and put words into actions. He said that people of Aunuu are facing danger everyday while the Fono and government leaders continue to call hearings and discuss plans without any action.

“Let’s put all our words into action and do something to protect the lives of people living on the island of Aunu’u,” Tiaoali’i said, adding that the Fono needs to appropriate funds in the DPS budget for the new fiscal year to fund a boat for Aunu’u, and to end the use of alia for transportation.

Le’i told the committee that when the weather is bad, all police officers from Aunuu would be working from the wharf in Aunuu to monitor the safety of everyone on the island.

“This is our primary job — the safety of our people and we want to make sure that the tragic accident will not repeat in the future,” said Le’i.

Manu’a #1 Representative Vesi Talalelei Fautanu Jr said that whatever effort government officials try to put into place to help the people of Aunu’u — they will never listen nor obey because “money is involved.”

“Despite the hard work by DPS, Fono or everyone who is working together to cure this ongoing problem, those boat owners will never listen because they care more about money rather than lives of the people,” Vesi said.

Fofo Representative Andra Theresa Samoa wanted to know if there’s a procedure when issuing licenses to alia owners to explain to them safety rules including the fact that every passengers must have a life jacket before boarding the boat.

Samoa echoed Vesi’s statement regarding the involvement of money saying that “this problem will continue to happen because the alia owners are always thinking about the economic value instead of the safety and the security of passengers.”

Samoa further stated that a scientist who visited the territory back in1980 said the area where the accident took placed has an under current strong enough to generate electricity.

Rep. Vaetasi Tuumolimoli Sane Moliga suggested to Le’i that the best move for DPS is to sit down with leaders of Aunuu — especially the boat owners — and discuss safety rules they need to comply with. Vaetasi said as long as the people of Aunuu don’t understand what the safety rules are, despite efforts by government officials and fono leaders to find ways to save the lives of people, they will continue to ignore all the advice because they don’t understand the impact of their actions.