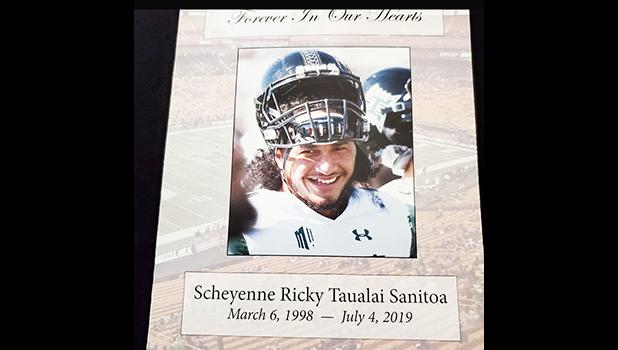 Honolulu, HAWAII — “Forever in Our Hearts” is the lead phrase, on the cover of the Memorial Service” program for the late Scheyenne Ricky Taualai Sanitoa — whose photo is embedded on the cover.

A student-athlete with the University of Hawaii Rainbow Warrior football team, Scheyenne passed away July 4th at the age of 21. He is known to his teammates and others as, “Schey”.

The photo of the program and other information posted on social media by family members shows the Memorial Service for the American Samoa native son, was held at 5:30 p.m Wednesday at Nu’uanu Memorial Park & Mortuary East Chapel in Honolulu.

According to the program, Deanna Fuimaono delivered the eulogy for her son, while UH Head Coach Nick Rojovich, coaching staff and his teammates gave special reflections on their relationship with Scheyenne, who was a Warrior linebacker.

There were also testimonials by family and friends, and a message delivered by Pastor Joe Onosai, who offered the closing prayer and benediction. Rep. Larry Sanitoa gave closing remarks for his son’s memorial service.

“On behalf of Scheyenne’s family, we take this opportunity to express our gratitude and thanks for your presence at our Hawaii farewell service for Scheyenne,” read the message in the program signed by Larry, Deanne, Children and Family.

“Words of thanks seem so inadequate for all of the kindness that each of you have bestowed upon our family,” the message states, and expressed thanks to the UH Athletics Department, Athletics director, Solovich, Coach Ricky Logo, the entire coaching staff, Scheyenne’s football teammates and the UH, “for the tremendous support and help in arranging Schey’s family service and his journey to Las Vegas for final services.”

In closing the message states, “You have each made a very difficult time in our lives more bearable and we are deeply grateful.”

Scheyenne is survived by his parents along with nine brothers and sisters, according to the memorial service program.

Since his passing, social medial has been bombarded with messages of condolence from people in American Samoa, Hawaii, the US mainland and other parts of the world to the Sanitoa family.

Based on the most recent social media posts, Wednesday’s memorial service was packed. “RIP,” said the many social media messages to Scheyenne.