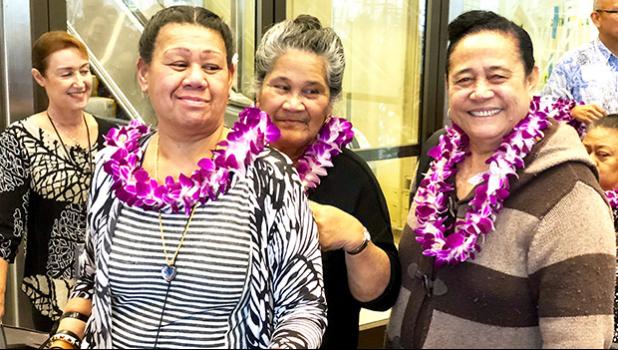 Smiling passengers before boarding Hawaiian Airlines’ Inaugural Airbus A330-200 service from Daniel K. Inouye International, Honolulu, Hawai’i yesterday afternoon, arriving last night. They each received an ula as part of the celebration for the new service.

Incoming CEO Peter Ingram was also scheduled to be on the inaugural flight of the airbus with HA senior executives, according to a Hawaiian Air official. HA hosted a reception last night at the airport to celebrate the new American Samoa air service.

Hawaiian Air will introduce its new schedule on March 22, 2018 — flying in and out on Monday and Thursdays, instead of Mondays and Fridays, but at the same arrival and departure times.

The new service offers a 40-seat increase of passenger capacity, as well as 3 cabin classes:  Economy, Extra-comfort and 1st Class. It is unknown at this time what the tickets prices will be.

At this time, Samoa News offers a big “faafetai tele” to Hawaiian Air for allowing Samoa News photo journalist Barry Markowitz to travel on the flight to record this great event for American Samoa.