Gov: FY 2019 “spending will be based on the actual collection of revenues” 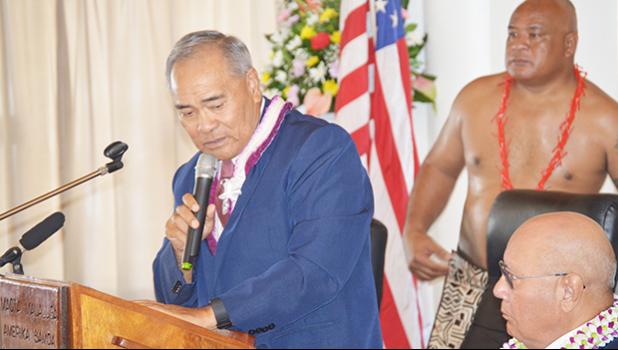 Pago Pago, AMERICAN SAMOA — The American Samoa Government's final budget proposal for the new fiscal year 2019 is just over $439 million, an increase of 11% from the current fiscal year, due to special events or activities planned for FY 2019, says Gov. Lolo Matalasi Moliga in his cover letter to the Fono leaders.

The governor explained that the FY 2019 budget threshold has been set at the FY 2018 budget level. “This decision reflects our new budget ideology limiting spending to actual revenues and not on the approved budget,” the governor wrote.

Therefore, “basic [ASG] operation” is set at the FY 2018 budget level. “However, due to specific activities or events planned for fiscal year 2019, the final budget amount will be slightly higher than that of FY 2018 budget,” the governor explained.

Source of funding for FY 2019 budget:

According to the governor, the financial plan for FY 2019 seeks to finance government activities for the new fiscal year, which begins Oct. 1, 2018, with the economic development strategy, aimed to bolster the local economy.

“In essence, it will foster the injection of needed capital to stimulate economic activity with an expected subsequent generation of jobs,” he explained. “Overall, the financial plan continues to place emphasis on expanding the economy of American Samoa and maintaining our service priorities while moving towards attaining our goal of a balance budget.”

Since the last deficit in FY 2014, “our spending and budget culture has been transformed” in which “spending will be based on the actual collection of revenues,” Lolo explained.

Additionally directors have been aware of this policy and doing whatever is necessary to ensure compliance. “This policy calls for the sacrifice by the entire government including the employees,” he points out.

Samoa News notes that one of the issues several lawmakers plan to raise with senior ASG officials during yet-to-be scheduled budget hearings deals with annual increments for government employees, some of them have complained to lawmakers of still not getting increments.

Total projected local revenue for FY 2019 stands at $98.69 million compared to $93.31 million approved in FY 2018. According to the governor, the 2% increase “merely reflects a conservative number in line with the current revenue collections.”

Additionally, the “increase is attributed to the impact of new revenue measures” signed into law.

Lolo points out that if the remaining revenue measures with the Fono are approved, “our revenue poster will correspondingly improve, thus allowing us to finance community projects” including the new Fono building, Museum, youth centers, school gymnasiums, and others.

Of the total estimated FY 2019 projected revenue, taxes will bring in a large sum of money for ASG, totaling $64.55 million. Other local revenue sources include licenses and permits as well as fees and fines.

Taxes have always been the government’s largest and main revenue source for many years.

Of the total projected tax revenue, $25.50 million is to be collected from individual income taxes; $21.55 million in general excise taxes; $12 million in corporate tax; $3.5 million under the soda tax; and $2 million for the cover-over military tax, according to data included as part of the governor’s cover letter to the Fono in submitting the FY 2019 budget proposal.

The governor explained that excise tax collection on cigarettes “took a dive” in FY 2018 due to pending contractual issues with off-island vendors including “constraint market forces” that are beyond local control.

However, imports of cigarettes have slowly normalized as outstanding issues worked themselves out, he said, noting that the newly appointed deputy director for the revenue division has a plan incorporating a process for better enforcement and especially to support the newly submitted revenue measures to the Fono.

(Samoa News notes that the only new money bill introduced last week in the Fono is the $2.6 million of American Samoa’s share from the federal government for fines paid by StarKist Co. Although, Samoa News understands that the Fono leaders have already been informed by the governor of pending revenue measures for Fono consideration.)

For corporate taxes, the government says revenue collection is “expected to slightly increase or be consistent” with that of FY 2018 “due to some uncertainties in business market conditions, and partly because most businesses have better bookkeeping of their goods and services taking advantage of available loopholes to legally pay less in taxes”.

Lolo points out that ASG Treasury Department continues to “aggressively enforce” all tax laws relating to ensuring that all tax payers have filed their taxes. He said revenue from individual taxes “is expected to slightly increase from previous years as employment continues to increase.”

Additionally, the soda tax and cover-over are projected to be slightly higher compared to the previous years mostly driven by an increase in preferential choice demands in the market place.

Majority of projected local revenues are earmarked for personnel costs of more than $64.26 million followed by over $25.15 million for contractual services. Money is also allocated for expenditures such as equipment, travel, and materials and supplies.

Samoa News will report later this week on the many issues in the governor’s cover letter, which was transmitted to the Fono in the form of a small-booklet.