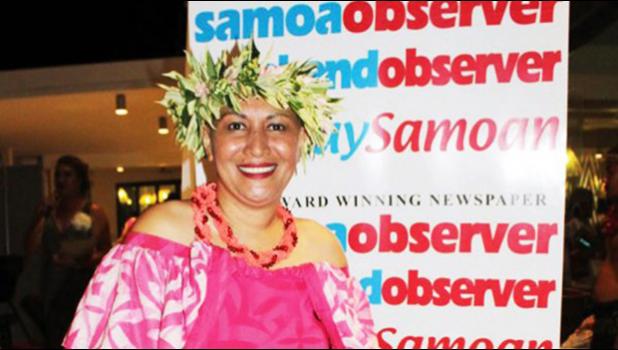 Apia, SAMOA — Manamea Apelu-Schwalger, the face of Samoa’s Pinktober and the fight against cancer, has passed away. She died peacefully on Sunday.

Manamea, a former Miss Samoa and Miss South Pacific, was laid to rest Monday morning (Samoa time) at her family’s homestead at Tanumapua.

It was a private ceremony attended only by family members.

But the ceremony, as Manamea would often say when she was alive is not a “farewell” occasion.

Rather, she preferred to say it’s a “see you later.”

During the past few years, Manamea has become the face of the fight against cancer in Samoa. Her message of hope during the last Pinktober was loud and clear, “Do what is tangible.”

She said that while cancer can happen to anyone indiscriminately, “we can always control how we react to it.”

Manamea played a leading role in getting the government to agree to paint the Apia Clock Tower pink last year as part of Pinktober.

She told the Samoa Observer last year, “You know what, I’m last stage cancer, so it’s my hope that YOU continue the conversations – that’s my dream… that Samoa continues that conversation and not just for cancer, all humanitarian causes that impact our society.”

Challenges faced by the media in Samoa – with the onset of internet technology – will be the focus of a National Forum on Freedom of Expression Online.

It is part of World Press Freedom Day activities being organized by U.N.E.S.C.O. and the Journalists Association of (Western) Samoa (J.A.W.S.).

To be held at the Insel Fehmarn Hotel in Tanugamanono on 3 May 2018, the theme of the Forum this year is "Looking over Internet Risks and Challenges.”

The gathering will also look at the government criticisms of media reports, fears about censorship, violence and the harassment of journalists in general.

“We intend to bring together several stakeholders to discuss the above theme and develop strategies to address issues as a result of social media,” said J.A.W.S. President, Rudy Bartley.

“It should also encourage a discussion how media freedom can be upheld and defended.”

He said the open nature of the internet is a benefit to freedom of expression and access to information, but it does have challenges.

“The negative side of internet is the openness to transmit hate speech, deliberate defamation under the guide of freedom of speech, sharing and leaking personal information and the spread of fake news."

According to Bartley, there will also be a panel to discuss safety of journalists.

Samoa's prime minister has welcomed the focus of the Commonwealth on vulnerable member states affected by climate change.

Tuilaepa Sailele Malielegaoi was speaking from London at the closing of the Commonwealth Heads of Govt Meeting (CHOGM) on Friday.

All 53 member countries have affirmed their commitment to the most ambitious UN Paris Agreement target of limiting the increase of global temperatures to 1.5 degrees celsius above pre-industrial times.

Members also committed to protecting oceans and marine environments from threats such as climate change, pollution and over fishing.

Tuilaepa welcomed the renewed interest in the Commonwealth's values and principles.

"As well we welcome the focus of the Commonwealth family to acknowledge the most vulnerable of its members. In particular, the impacts of climate change on our small island developing states."

Tuilaepa acknowledged the Commonwealth working to foster a fairer, more prosperous and sustainable future for all.

Samoa is to host the CHOGM conference in 2022.

Contrasts between Vanuatu's Melanesian people and their Polynesian type languages has given rise to a new theory on Pacific settlement.

According to a paleo-geneticist at the Max Planck Institute in Austria, Vanuatu was first settled by the Austronesian Lapita people around 3000 years ago.

These were people who had largely East Asian genetic ancestry. But new genetic research revealed how "Austronesian languages were retained throughout its history despite near-total replacement of early Austronesian-Lapita with Papuan ancestry".

Cosimo Posth said Vanuatu's genetic history shows a gradual admixture of the two peoples which eventually supplanted the original population but not their language or culture.

"Soon after the Lapita settlement we find, 400 years after, an individual with Papuan ancestry. And right after, like 500 years after, we find individuals that really are the sure signs of mixtures, so they have really this mixed ancestry," he explained.

Cosimo Posth said the earlier Lapita culture and language remained strong in Vanuatu despite being Melanesian.

A father of four from Leone, Samoa has revealed his “embarrassing” experience at the Savalalo Fish Market where police allegedly manhandled him while they were searching for drugs.

Speaking to the Samoa Observer, Pea Lesatele, said police must treat people with respect, even if they suspect them of a crime.

The roads leading to the Market were even blocked with some police officers stationed on fishing boats.

They took two suspects to be inspected and one of them was Lesatele.

The 37-year-old revealed that they searched him three times and they found nothing.

But it was the manner they had conducted their search publicly, which has upset Lesatele.

“What they did was not right and if I were a policeman I would not search anybody if I was not certain and without a good cause.

Later, the police issued the following statement about the raid:

“The Samoa Police Service carried out a raid at the Savalalo Flea Market in search of marijuana this morning the 20th of April 2018 (Friday).

A concerning number of the public have addressed the issue of marijuana being sold at the flea market and pose a risk to the youth of Samoa.

A majority of these men are known to police of being dealers and suppliers of marijuana.

However, due to their histories they have mastered ways of concealing narcotics from the police and K9 dogs.

A total of 8 individual were arrested and 6 were charged for possession of narcotics. Police also managed to seize a certain amount of marijuana cigarettes found on these individuals. Please be advised that marijuana is illegal in Samoa.

We also thank the general public for their patience during today’s raid and if anyone has any concerns with regards to any narcotics matter please contact our Narcotics Division on 22 222 ext 292. Fa’afetai lava and be safe out there Samoa!”