Would you support the Fono revisiting American Samoa drug laws in relation to marijuana (THC) and CBD?
Yes to both marijuana and CBD
70%
No to both
16%
Yes to marijuana, No to CBD
7%
Yes to CBD, No to marijuana
7%
Total votes: 641
Home 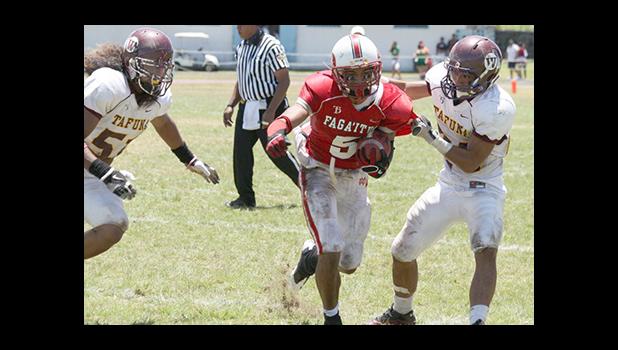 Washington State Cougars star safety and former Faga’itua Vikings Shalom Luani is being blown all over social media with the latest story about Luani not facing charges from a fight in a Pullman Domino’s Pizza on August 24, of this year, in Washington state. The Seattle Times reported that Shalom Luani would not be charged in the assault, as he may have acted in self-defense.

The former Faga’itua Vikings star safety and American Samoa All Star safety who graduated from Faga’itua High School in 2012 was not only huge on the football field, but his athleticism was also needed to represent American Samoa on the soccer field, in numerous international tournaments.

According to espn.com, Prosecutor Denis Tracy said video evidence showed Luani throwing a punch that broke the alleged victim’s nose – “in this case, it is my view that no reasonable jury could conclude beyond a reasonable doubt that Mr. Luani was not acting in self-defense.”

In other related news released by espn.com, WSU athletic director Bill Moos said the Cougars were “pleased that the prosecuting attorney’s office came to the same conclusion as we did regarding this case”.

He added, “While not always afforded the opportunity, I believe this illustrates the stance we have taken from the beginning which is to handle such matters internally, not speak in great detail, until the legal process has played out. Though we choose to reserve comment on such instances, we continue to cooperate with law enforcement, and assume innocent until proven guilty.”

WSU coach Mike Leach suspended Luani for the Cougars opening game according to espn.com, but he has allowed him to play since, while investigation was ongoing. Leach also expressed frustration with the investigation, media publicity and the Pullman police’s treatment of his team.

“The facts as I know them – it’s not near what’s been publicized and I’m disappointed that the court of public opinions been tainted and contaminated in the fashion it has,” Leach said on September 5th, “and at any rate, Shalom’s relationship with our team, that’ll remain with us.”

The Cougars star safety has seven tackles and two interceptions this season. He started all 13 games for the Cougars in 2015 after transferring from City College of San Francisco. He finished third on the team with 90 tackles and earned All-Pac-12 honorable-mention honors.

While in American Samoa as the Vikings all-purpose player, Luani was selected as Samoa News Player of the Week nine times throughout all his four years in high school football. During his sophomore year in 2009, Luani was named ASHSAA Football Junior Varsity MVP of the season.

During his junior year in 2010, Luani represented the Vikings in an under-18 Rugby Sevens tournament — where he was named MVP after leading the Vikings to winning the Cup over the Leone Whites 7 - 0.

His senior year in American Samoa, Luani represented American Samoa’s All Star team in the Samoa Bowl game against Hawai’i, where our local team won 34 - 28 after double overtime – Luani scoring the final touchdown of the game.

In July of the same year, Luani was one of the homegrown sons of the island that represented the territory in the IFAF Under 19 World Championship. He led our local team to beating Panama, and France, along with their historical 27 - 6 loss against the US – the first team ever in IFAF history to score against the US team.