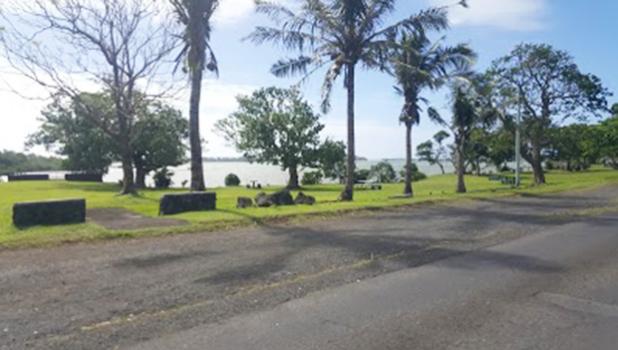 Pago Pago, AMERICAN SAMOA — The court has set bond at $500 for a man being charged with public peace disturbance and resisting arrest.

Sangster Loia made his initial appearance in District Court on Thursday.

The charges against him stem from an incident that occurred in Tafuna this past Wednesday.

According to the government's case, a fight involving high school students broke out near Lions Park and cops were called for assistance.

After all the kids were sent home, cops patrolling the area claim that Loia, armed with a 4-ft. metal paddle, was walking on the road near Paradise Pizza with several students from Nuuuli VoTech High School.

The criminal complaint alleges that when cops asked Loia for the paddle, Loia refused. One officer got out of the police unit and took the paddle away, telling Loia that his mother can come by the Tafuna Substation to retrieve it.

According to police, because there have been a number of fights amongst high school students, the decision was made to confiscate the paddle, to prevent it from being used as a possible weapon if another fight were to break out.

Investigators claim that Loia continued to mouth off at them, and he resisted arrest by yanking the officer’s arm away. A crowd of NVTHS students had formed and they surrounded the cops. The students are alleged to have tried to pull Loia away from police, with some students even pushing the cops away.

Loia and a police officer got into a scuffle that resulted in the cop having to hold Loia against a fence in order to arrest him. But Loia allegedly continued to resist. The two men ended up on the ground.

According to police, Loia was finally cuffed but he continued to shout profanities. His dad allegedly ran over and told police to leave his son alone. The cop who was trying to detain Loia claims that while he was on the ground, he felt someone kick him on the left side of his face. He said it was Loia's dad, Kuka.

It is alleged that in addition to getting kicked in the face, the cop was also punched twice in the chest. The cop sustained 2 lacerations on the left side of his face.

Loia was taken to the LBJ for medical assistance, as he was complaining about soreness in his arm and shoulder. He was treated and transported back to the TCF. His father however, was detained at the TCF on a 48-hour hold.

If he is able to post bond, Loia is ordered to comply with standard conditions of release. Additionally, he is to stay away from local school campuses.

His pretrial conference is set for Feb. 20