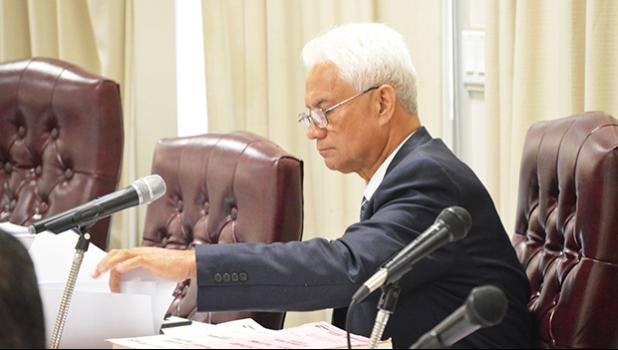 Pago Pago, AMERICAN SAMOA — Tualauta Representative Larry Sanitoa believes about $7 million from CARES Act grants to American Samoa has been used for several ASG projects that are not eligible for CARES Act funding.

Sanitoa said that looking at the list of projects funded by the CARES Act grants, the projects go against the purpose of the funds awarded to American Samoa. He said that there are relevant projects that need to be funded from the CARES Act — for example — helping out people stranded off island by paying for a flight to bring them all back home. He said that this is a big problem.

He told the AG that if we read through the CARES Act provisions, it’s all about COVID-19 activities. Sanitoa asked the AG whether these projects were something that comes from the Task Force or whether it was the decision by the governor only.

Sanitoa further told the AG that this is not a small amount of money and there are other essential projects that the government needs to prioritize instead of using funds on projects that are not COVID-19 related.

His concern is that there are only four months left for the current Administration and he doesn't want a repeat of the same thing that happened to the Fono where the US Department of Treasury instructed the American Samoa Government (ASG) to pay the money back because the stipends were not COVID-19 related.

“If something happens with these projects, if the audit says that the projects are not related to the CARES Act, we’re looking at $7 million plus from local revenue to support this. Who is going to pay this?” Sanitoa asked the AG, adding that it’s her duty to advise the governor on what is legal because when the current administration’s term is over, the next administration and the people could suffer.

Sanitoa said that after looking at the CARES Act carefully, he thinks that the money spent on these projects is not related to the CARES Act.

“I don’t know if there is any connection between the demolition of the court house and the CARES Act,” said Sanitoa, adding that our local hospital needs funding to continue on with their services during the COVID-19 pandemic.

“We need to have a national plan for the territory if something happens and that’s the reason why this funding was awarded to American Samoa — not to be used for these types of projects. All these projects have nothing to do with the CARES Act,” Sanitoa concluded.

Other committee members echoed Sanitoa’s statement saying that some of these funds must be used to pay for a flight to bring home our local residents stranded in Hawaii and the mainland.

When asked if there’s Medicaid funding for another medical charter to take patients needing treatment off island, Medicaid Director Sandra King Young said they do not have a local match for a medical charter.

Until a source of funding for a local match can be found, the $84 million that Congress approved for the American Samoa Medicaid Program last year cannot be used. American Samoa has to come up with a match of about $30 million.

Rep. Vailiuama Steve Leasiolagi said the majority of Representatives are leaning towards repealing the 2% wage tax that is now going to LBJ Hospital, 50% for operations and 50% for the off island referral program.

He said the intention was to repeal that 2% and not appropriate the revenue for anything else. But having heard the need for local matching perhaps they can work with the 50% being earmarked for the off island referral program.

He said the $84 million is very much needed at this time to fund the territory’s health needs especially the off island referral program and every effort must be made to secure a local match so that this funding can be used.

He advised the Task Force to inform these departments to use their funds because they are blessings from God. He further stated that we hadn’t expected to receive this huge amount of funding this year.

Looking at the grant of $35.1 million that ASG received under the CARES Act as of July 31, $16.4 million has been spent on COVID-19 operations, which includes payroll for ASG personnel related to coronavirus response, stipends for the Coronavirus Task Force and Working Group, and construction of quarantine facilities and charter flights operated by Samoa Airways.

A total of $105,390 was paid to vendors who supplied meals for the quarantine sites between March and July 31st.

The names of the vendors are not listed in the reports that Treasurer Ueligitone Tonumaipe’a and Budget Director Catherine Saelua distributed at a hearing of the House Budget and Appropriations Committee into the COVID-19 grants awarded to ASG.

These payments came from the $35.1 million that ASG was awarded under the CARES Act. Some of the vendors, which DOH used for the meals are KS Mart, Fonuea, and DDW.

Samoa Airways received a total of $147,240 for charter flights to Manu’a and the government paid $10,467 for the pilots to stay at the Tradewinds Hotel while the plane for Manu’a charters was parked at the Tafuna Airport.

Other vendors who received payments from he COVID-19 money are Nana’s Inc which was paid $440,000 for quarantine sites and Paramount Builders which received $299,943 also for quarantine buildings. Other costs listed are $210,700 for five new vehicles for the Department of Public Safety enforcement. The Territorial Bank of American Samoa also received $100,000 for bank checks.

During a House Budget and Appropriations Committee hearing two weeks ago, Sanitoa stressed the Budget Act requires all new funding to be appropriated by the Fono. Sanitoa’s statement came after the committee received a report about the total funding received by ASG during from the COVID-19 grants,

Sanitoa said during that hearing — had funding information been brought to the Fono for review it would have resolved all the questions being asked now. Further that is part of the checks and balances between the branches of the government.

He then moved on to thanking ASG for the funding that was distributed to all the private schools around the territory, saying that these schools help to educate sons and daughters of American Samoa.

His advised that ASG needs to follow up on how these funds are spent to make sure each school is in compliance. He also said that he doesn’t know whether private schools understand how to spend this funding especially when it comes to federal money.

Sanitoa also asked the treasurer if construction of facilities and roads are allowable costs under the CARES Act. Tonumaipe’a responded Yes; if the buildings are used for COVID-19 response, such as to quarantine people, it’s allowable. If roads are connected to the care of patients, it’s also allowable.

Total funding that ASG has been awarded in COVID-19 grants is $164.6 million of which $69.7 million has been spent.