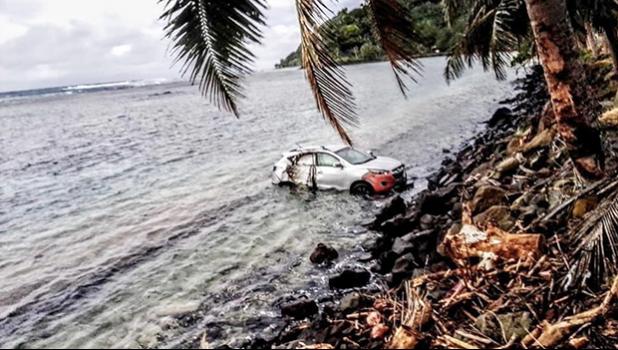 Pago Pago, AMERICAN SAMOA — The driver of the vehicle that was involved in a fatal accident Sunday Sept. 13, 2020 in Utusia, denied the allegation against him when he appeared in High Court last Friday for arraignment.

He is charged with one count of homicide by vehicle, a class D felony, punishable by imprisonment of up to 5 years, a fine of up to $5,000, or both.

During his initial appearance, Sofeni waived his right to a preliminary examination (PX), and his case was bound over to High Court for further proceedings.

His pretrial conference is set for next month.

It was around 6:02a.m on Sunday, Sept. 13th, 2020 when the dispatcher at the Central Police Station in Fagatogo received a call from a female individual reporting a one-car accident in Utusia with a possibility of injured occupants involved.

When police officers arrived at the scene, they confirmed fatal injuries were sustained by a back-seat occupant of the vehicle. He was later identified as Marquis Leauma.

Police investigators first interviewed several individuals who were at the scene and also reviewed surveillance video from a gas station nearby the scene, which revealed two male occupants leaving the scene of the accident in a rush. They appeared to be running and limping off heading towards the west.

It was also discovered during the investigation that the vehicle involved in the accident was registered to Abigail Poyer. When questioned by investigators, Poyer stated that the decedent Leauma had borrowed her vehicle the night before to go out drinking with his friends. She also stated that Leauma would often go out riding with boys from Atu’u where his was living.

As investigators were trying to find out the names of the boys, they were informed that a person only known by the name of “Blessing” might help them identify the boys.

Investigators met up with Blessing at the LBJ Hospital and she told investigators that Leauma was with a male named Prince and another unknown male the night before the crash.

As the investigation continued, investigators found out that Prince’s real name is President Nelisi, and they visited Nelisi’s residence and were told by his family that Nelisi left the house the night before Sept. 12, 2020 and had not returned home since.

During the investigation in the village of Atuu, Manuita Sofeni’s name (defendant) was revealed as the person last seen with Nelisi and Leauma the night before. This information led investigators to Sofeni’s house in the same village where they met with Sofeni’s father.

Sofeni senior informed investigators that his son left the house the evening before Sept. 12, 220 and had not since returned home.

Three hours after the crash, an All-Points Bulletin was put out to all units and Police Stations throughout the island to be on the lookout for the aforementioned male individuals suspected of leaving the scene of the fatal crash.

Around 3:21p.m on the same date, Nelisi’s mother called and informed investigators she was on her way to the Fagatogo Police Headquarters to turn in Nelisi and Sofeni.

When interviewed by investigators as to the circumstances surrounding the crash, Nelisi stated that he was with Leauma and Sofeni the night before driving about four to five times between Atu’u and Alofau. He said that at one time they traveled to the west side heading to Malaeloa to the Aute bar where they bought several cut off straws containing methamphetamine (ice).

Nelisi further stated that Leauma was drinking alcohol in the back seat while he and Sofeni were switching off at taking the wheel. He said on their last trip to the east side, Sofeni was driving recklessly by speeding at the curves causing their vehicle to drift on the side of the highway several times.

He also told investigators that Sofeni was driving in the same reckless manner on the way back from the east side past Alofau. On the stretch of road in Utusi’a before the accident, Sofeni oversteered the vehicle onto the grassy gravel and sandy side of the road while speeding, causing him to lose control of the vehicle that he tried to steer back up onto the main road, but ended up crashing.

Nelisi said that he ended up passing out for few seconds after the crash and then when he regained consciousness, he decided to take off because he was scared.

After he was advised of his rights by investigators, Sofeni stated that he understood his rights and decided to make a statement.

He admitted to driving the vehicle at the time of the crash. He stated to investigators that they were driving back and forth between Atuu and Alofau all night before the crash and that it was Leauma’s decisions as to where the car should go. He also stated that Leauma was heavily intoxicated.

Sofeni said that on their last trip coming back from Alofau, he was very frustrated and irritated at Leauma repeatedly mocking him, saying that he drives too slow. He said he turned the speaker up loud in the car and started to speed up. He admitted that the vehicle drifted several times towards the oceanside because he was driving too fast at the curves.

Sofeni told investigators that at the last stretch of road in Utusi’a before the crash, he could hear Leauma from the back seat demanding him to speed up the vehicle and at the last drift to the side of the road, Sofeni stated that he could not regain control of the vehicle and it crossed onto the opposite lane where it struck a coconut tree before plunging into the ocean.

Leauma was pronounced dead at the LBJ Hospital by attending physician Dr Edward Leziton The cause of death was ruled as severe traumatic brain injury. The doctor said there were visible injuries on his head, face and he observed blood in Leauma’s ears, nose and mouth that were consistent with trauma to the head.

Leauma, a longtime North County resident who had been a high school football standout and in recent years was working toward a doctorate has a drug case pending in High Court.

He was the driver of a vehicle that was stopped by police earlier this year for speeding and not wearing a seatbelt, and later accused of violating local drug laws after police allegedly found a hand rolled marijuana joint in the vehicle. At the time he allegedly told police nobody could touch him or arrest him because he’s the nephew of Governor Lolo Matalasi Moliga.

He was charged with unlawful possession of marijuana, a felony punishable by imprisonment of 5-10 years and a fine of $5,000-$20,000 or both; along with several traffic citations including driving under the influence of alcohol (DUI), a class A misdemeanor, punishable by up to one year in jail, a fine of up to $1,000 or both.

Two males were in the vehicle when it was stopped: the driver, Leauma, and 24-year-old Allen Tuiletufuga, the passenger.

Officers detected a strong odor of alcohol on Leauma’s breath and the smell of marijuana coming from the interior of the vehicle. When asked for his name, the driver said his real name is Marquis Moliga, and his uncle is the Governor of American Samoa. Police later found out that the driver is also known as Marquis Leauma.

Leauma was arrested after refusing to take the Standardized Field Sobriety Test (SFST).

During an inventory of the vehicle, cops found what appeared to be a hand rolled marijuana joint under the passenger seat and in proximity to the driver. When asked about the joint, Leauma replied, “It’s not mine, I don’t smoke weed.”