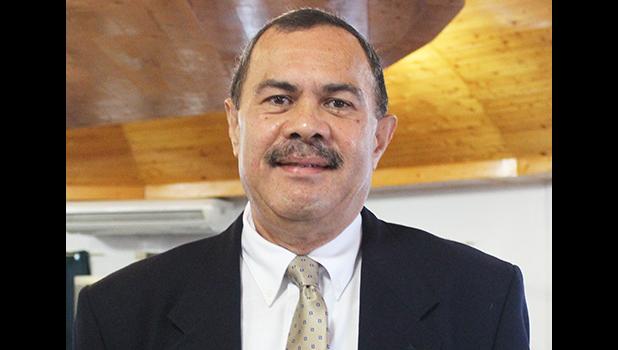 Pago Pago, AMERICAN SAMOA — The Director of the Department of Human and Social Services (DHSS), Muavaefaatasi John Suisala is supporting a letter signed by two deputies from his department denying allegations that funds for those with developmental disabilities went to an inactive organization to pay services that were never performed.

In a meeting between Samoa News and Muavaefaatasi, along with his deputies and division heads last Friday, Muavaefaatasi stated that he’s behind the letter and he also supports the letter.

He did not wish to offer any other comment regarding the subject.

Last week Samoa News received a letter from the DHSS regarding the article, “File alleges funds for disabled went to inactive organization”, in the February 17, 2021 edition of Samoa News.

The letter dated Feb. 19, 2021 describes the report as a “one-sided story” referring to a file disseminated to Fono members on the same week, “containing allegations of illegal activities and the misuse of federal funding in the Department of Human and Social Services (DHSS).

“We would like to go on the record to categorically state that the news report is inaccurate, misleading, and a gross misrepresentation and misinterpretation of facts. Therefore, we unequivocally and unreservedly disavow these allegations of illegal activities and improper use of funds. There is no truth to this,” the letter said.

The letter said that the documents described in this article lack context. “They do not reflect systems for checks and balances, including multi-layered review and approval processes, along with the deliverables that need to be satisfied and the level of verifiable documentation that is to be provided before payments are initiated.”

“It is our position that the reporter should have conducted a more thorough investigation to verify the information he received, given its very damaging and litigious nature. His lack of due diligence is irresponsible.”

“Ignoring basic disciplines of journalism such as determining whether sources are credible and authoritative fact-checking, and avoiding the pitfalls of subjective interpretations results in falsehoods that cause grave harm. Sensationalism has no place …”

The letter further stated that the allegations contained in the story “have affected the individuals mentioned in this article (as well as those who are referenced), not to mention the sullying of our department’s name and the employees who now feel tainted by it.”

Moreover, DHSS is fully funded by the Federal Government with an annual budget of more than $26 million. We are very concerned that our grantors who monitor our local news will become alarmed and our current and future funding may be jeopardized due to these unfounded allegations against DHSS.

“In closing, we strongly believe that a retraction of the aforementioned article and an apology for the harm it has caused is in order because of the lack of due diligence that is expected of true journalists to objectively and accurately report on facts after a thorough and systematic review of multiple knowledgeable and credible perspectives,” the letter concluded.

Samoa News’ editor-in-chief stands by reporting of the issue by its reporter Ausage Fausia.

The one story, the DHSS letter references does not encompass the scope of the reporting by Samoa News on the issue — reporting that occurred over a period of about two weeks — Feb. 17, 2021 to Feb. 25, 2021. In total, five (5) stories were published about the issue, among which included an interview with the project manager of the non-profit organization categorically denying the allegation.

The timing of the release of the ‘confidential file’ to House members was before Muavaefaatasi John Suisala’s confirmation hearing in the House for the post of director of the Department of Human and Social Services (DHSS).

After discussion in the House, the chair of the House Human Social Service Committee, Rep. Su’a Alexander Eli Jennings made it clear that the confidential file that was circulated in the House chamber would not be a part of the confirmation hearing for the acting director of the DHSS.

Samoa News reported the chair’s position in its story published on Feb. 18, 2021, “File that ‘appeared’ in House will not be part of DHSS confirmation hearing”.

Of note, Su’a spoke to Samoa News, as reported in the Feb. 18th article, saying that he “describes this move as personal and political and the reason why this file was brought into the House chamber right during the time of the confirmation hearing is to discredit the nominee.” He said, “This is very personal and political. It happens out there nationally in Washington D.C and it happens here also.”

Muavaefaatasi was later confirmed by the House 16- 1. His hearing did not include questions on the documents and allegation, and lasted less than 20 minutes.

He was also confirmed by the Senate the following week, 14- 1. However his Senate confirmation hearing was a 40-minute event, which did include a variety of questions from Manu’a senator Malaepule Saite Moliga — among them about Muavaefaatasi’s involvement with a “non-profit” group — referring to the Center for Families of Individuals with Developmental Disabilities (CFIDD).

CFIDD is the group the documents identify in the file that the House committee did not use in its confirmation hearing. At no time, during the Senate hearing did the Manu’a senator identify a file or documents as the source of his queries into the CFIDD group, nor did he reference any possible allegations of specific mis-doings.

Instead, Sen. Malaepule’s questions centered around what he believes is a “conflict of interest”, pointing to CFIDD getting grants from DHSS, when Muavaefa’atasi had a role in both organizations.

Muavaefa’atasi confirmed that CFIDD had received grants but pointed out that a project manager within DHSS oversees it and signs off on it.

In answer to a question from Sen. Magalei Logovi’i, Muavaefa’atasi said that the grantor would conduct an audit of the programs administered by DHSS if there are problems that surface. But, he said none was ever carried out during his tenure as director of DHSS in the Lolo Administration.

Samoa News also reported in an article, published Feb. 18, 2021 — “CFIDD project manager denies the non-profit misused fed funding” —  based on a Samoa News exclusive interview with the project manager of CFIDD in which she strongly denies the allegation that the organization has engaged in a scheme where CFIDD received federal funding to pay for services the organization never provided.

According to the project manager, Nellie Faumuina, she is currently the head of the CFIDD and also the Director of the Women, Infants and Children program (WIC), a division of the DHSS. “CFIDD was never engaged in such a scheme where we received funding for services that we never provided,” she stated.

The project manager explained that CFIDD has provided services for families of individuals with developmental disabilities for over 20 years, and all funding CFIDD received was for the services they provided according to their agreement with the American Samoa Development Disabilities Planning Council (ASDDPC).

Samoa News has received comments from other local organizations and programs offering services for people with disabilities.

A representative from the PCSN Program (Parents of Children with Special Needs) told Samoa News that PCSN programs mainly work with families of children with disabilities, these are kids that have been born with syndromes or had injuries or medical problems before age 18 resulting in developmental disabilities.

The PCSN said the CFIDD (Center for Family of Individual with Developmental Disabilities) article came as a shock. CFIDD was an excellent program offering many activities, tutoring, and help navigating the system locally.

The article stated CFIDD was working on transportation and day care so they would be disability friendly. The PCSN noted that these are definitely two very good projects and they hope they are able to continue to pursue these goals.

“I would say as a parent of a child with disabilities, there are many programs out there but we never hear of them. Parents even come to me upon hearing of PCSN Network that they never heard of PCSN, yet we are on the radio, have a FB page, events and workshops, and word of mouth. It is hard to get information out there,” the PCSN representative said.

She suggested that what would be awesome would be to have a directory of all services that offer help to those with disabilities, and hand it out to every parent of children in SPED, at LBJ, and each program so we can all connect.

“I was really excited to see our new governor’s team had noted specifically to have programs for those with disabilities.”

A goal of PCSN is to have an enrichment center much like Easter Seals, for our adult children out of school, where they can continue to learn and grow. “We are parents taking action in PCSN, and praying one day to have a center to meet the needs of our families,” she said.

The organization representative said that these programs help people to move forward in their lives.

“Right now, for many, they are locked in the house, some are being abused. Our organization, which is currently volunteer-based because of lack of funding, is called “Back on Track”. We work with people with mental disabilities providing support and resources,” the spokesperson told Samoa News.

“We have one person who has mental health disabilities and, as a result of inadequate or lack of services, is now living homeless and has been sexually assaulted numerous times.

“I saw a report recently for a person with mental & physical disabilities recommending they be institutionalized. Why?

“Because American Samoa has inadequate services or lacks services & programs to help them work towards independence. In the states, people with disabilities qualify for SSDI, but if they move to American Samoa it gets discontinued. It's to assist with the needs of the disabled person. I think our government should look into this.”