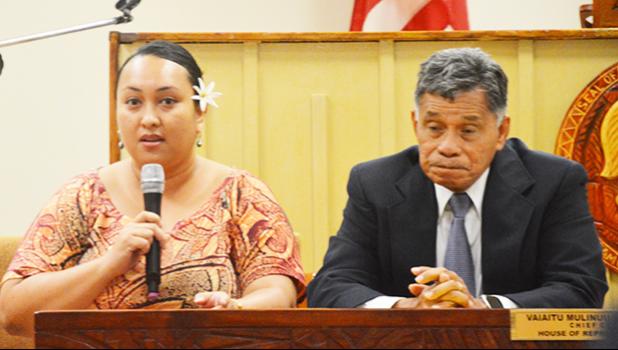 Pago Pago, AMERICAN SAMOA — Gov. Lemanu Peleti Mauga is planning to establish a Joint Task Force consisting of members from all Law Enforcement Departments and Agencies in the American Samoa Government (ASG) for the purpose of tackling the rising drug problem in American Samoa.

This was revealed by the Director of the Department of Homeland Security (DHLS), Samana Semo Veavea during a House hearing this past Tuesday where they discussed the problem of drugs in American Samoa and also the outcome of police investigations into some of the pending drug cases.

The hearing was chaired by the committee chairman, Rep. Lua’itaua Gene Pan.

Samana first responded to questions from Rep. Vaetasi Tuumolimoli Saena Moliga. According to Vaetasi, the two main gates for drugs to enter American Samoa are the airport and the wharf and from his view— this is not an easy issue because it’s our own people who work in these two main areas.

“People who work at the airport and the wharf are the key people safe guarding our nation and if drugs keep coming onto our shores — then someone is not doing his/her job,” Vaetasi said.

He told government officials that faipule hear a lot of reports and rumors about cases where drugs were found at the airport, the US Post Office and even the wharf — and not a single one of these drug cases has been resolved.

“We hear about the latest case where drugs were discovered allegedly smuggled onto our shores in a new television and up until now, nothing has been done in that case.”

He said that if the drug problem continues to grow then the future of our young people will suffer. He also told the witnesses to continue on with the drug testing on all government employees because it will reveal the truth.

In response, Samana stated that his department is working very closely with several federal agencies including the FBI and the DEA.

Attorney General, Fainu’ulelei echoed Samana’s statement and said that the whole community including government and cultural leaders, churches and families must work together to cure this drug problem.

Rep. Lavea Fatulegaee Palepoi Mauga questioned Foifua on the outcome of the police investigation regarding the last case where drugs were discovered hidden inside a television.

“Was there a police investigation into this matter?” Lavea asked Foifua.

In response, Foifua said DPS never received a report about this case.

Customs Chief, Elisara intervened and confirmed that Customs has completed its part of the investigation into this matter and they are in contact with the DPS Vice and Narcotics K9 Unit. However, he cannot offer further information about the case because it’s still under investigation.

Foifua Jr told the House committee that police are still doing their job to investigate any case involving illegal drugs in the territory.

Rep. Manavaalofa Tutuila Manase said despite it being over two years now since our borders have been closed due to the COVID-19 pandemic, a lot of people have been arrested and charged for unlawful possession of illegal drugs.

“From my own personal perspective, it appear to me that drugs are being manufactured locally based on the growing numbers of drug cases coming before the court almost everyday and if this is true, then we’re facing a big problem right now,” Manavaalofa said, adding that he volunteered himself to be part of the Joint Task Force so that he can offer his help in revealing people who are suspected of doing drugs in his district.

He said that his district is one of the main areas from where a lot of drug cases are coming.

According to him, DPS conducted 69 drug raids last year. In ten of these raids, police discovered weapons and ammunition.

He also stated that after putting together a report from police raids from last year, it clearly revealed that there is a possibility that drugs are being manufactured locally.