COVID Task Force assailed with tough questions from the faipule 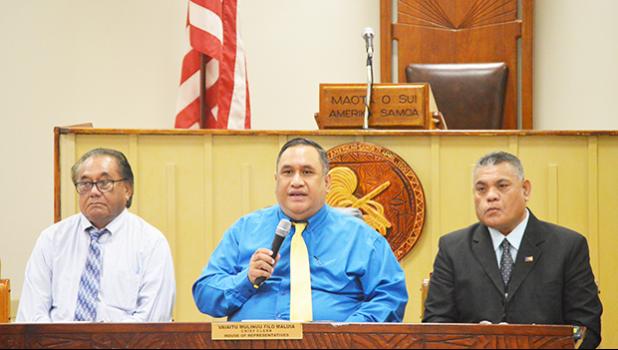 Pago Pago, AMERICAN SAMOA — COVID-19 Task Force members who testified before the Fono House Health Committee this week had to answer some tough questions re a Samoa government official who did not go through pandemic protocols when he arrived from Samoa, as well as those people who got to return on Hawaiian Air chartered Medicaid flights to American Samoa, when these flights are not suppose to have anyone on them when flying in from Honolulu.

The last repatriation flight is arriving today bringing home the final residents repatriated in phase I of the program. Among the passengers arriving today are faipule who traveled off island for medical care.

The question of an official from the Samoa Government entering the territory last month to attend a funeral held in Pago Pago was raised during the hearing in a heated discussion.

According to Vice Speaker of the House, Fetu Fetui Jr, his office received complaints from members of the public about a Samoa Government official who did not follow the quarantine protocol when he arrived in the territory. According to Fetu, the Samoa Government minister went straight to the funeral and the next day, this minister returned to Samoa.

“Who authorized this minister from Samoa to enter the territory and go straight to his family funeral instead of going through the quarantine process?” Fetu asked.

As Acting Director for the Department of Health, Vesi Talalelei Fautanu Jr was trying to explain what happened, when Fetu interrupted and said, “Just tell the committee who authorized this minister to walk free while our people are arriving from Hawaii and go through the quarantine process.”

Vesi told Fetu that if wanted to know the person who authorized the leader from Samoa to enter American Samoa, then, the right person who can answer his question is the Task Force Chairman and GAR (Governor’s Authorized Representative), Lt. Gov. Talauega Eleasalo Ale.

Fetu was not satisfied with Vesi’s response. He told Vesi that he did not appreciate his response.

“If you knew that you’re the one who authorized this person to enter the territory, just say it,” Fetu said.

Fetu turned to Attorney General, Fainuulelei Falefatu Alailima-Utu and said, “AG, there is only one law for everybody.”

Alailima-Utu told Fetu that he doesn’t know anything about a minister from Samoa entering the territory last month.

Fetu fired back and said, “Vesi knew exactly who is this person is. This person is the Minister of Health from Samoa.”

Alailima-Utu set the record straight. He told the committee that the person Fetu was referring to was not a minister. He is Leausa Take Naseri, the CEO of the Health Department of Samoa.

LBJ CEO Faumuina Taufete’e Faumuina told the committee that he recalled the time Leausa came to the territory last month, to attend a special meeting with Gov. Lemanu Peleti S. Mauga, to discuss the issue regarding the opening of the borders between the two Samoas. According to Faumuina, Leausa returned back to Samoa after the meeting on that same date. He said he has no idea regarding Leausa attending a family funeral.

Dr. Saipale Fuimaono told the committee that Leausa went through the quarantine process when he arrived in the territory.

Other issues discussed during the hearing were: local vaccination update, commercial flights by Hawaiian Air to and from American Samoa, and the latest updates on the COVID-19 pandemic around the world.

American Samoa remains a COVID-19 free country, along with other Pacific Island countries such as Vanuatu; Solomon Islands; Samoa; New Caledonia; Republic of the Marshal Islands and Papua New Guinea.

Alailima-Utu told the house committee that August 26th is the tentative date for the first commercial flight by Hawaiian Air to and from American Samoa since March of last year.  He said that this date can change depending on the territory’s preparations to move from Phase 1, which is the repatriation effort that ends with the last flight from Honolulu today, Thursday July 29th, 2021.

Alailima-Utu made it clear that the territory’s borders are not being reopened, rather they are allowing Hawaiian Air to operate flights with restrictions. He explained the registry process and that travelers would have to undergo three COVID-19 tests in Honolulu prior to boarding the flight to Pago Pago. A positive test would automatically eliminate the traveler.

(See Lt. Gov. Talauega’s full explanation of the three phases of the repatriation program and the new “Talofa Pass” in yesterday’s issue.)

LBJ CEO, Faumuina told the committee that LBJ is ready if anyone tests positive for the virus. So far, LBJ has 52 ventilators with up to 50 rooms set aside for COVID-19 patients. There are two big containers ready for storage if the virus arrives on our shores and kills our people.

The Task Force praised the response from members of the public especially parents who brought their children in to get the vaccine. Alailima-Utu said that the only way that American Samoa will remain COVID-19 free is to get everybody vaccinated. He thanked those who have already been vaccinated for supporting the effort of protecting American Samoa from this deadly virus.

Members of the house committee praised the Task Force for their hard work and commitment to make sure American Samoa is protected from the virus.

He told the hearing that several members of the community called his office and asked if he was aware of the inbound travelers on the Medicaid charter last week.

“One of the callers pointed out to me that many residents who are still waiting to come home have asked why the empty seats couldn’t be used to bring some of these stranded residents. This is unbelievable,” Fetu said.

He continued. “This is not right. Usually the Medicaid charters travel empty from Honolulu except for 1 or 2 medical escorts who make a turnaround trip. However, the flight brought two cabinet members while several Representatives who were supposed to be on that flight were not allowed to travel on last week’s charter flight.”

Fetu further stated that faipules need to be on island to attend the joint budget hearings for the new fiscal year, which began this week.

Acting Director for the Department of Health, Vesi Talalelei Fautanu Jr explained that the reason why faipules did not come on that flight was that the Task Force didn’t receive a formal request from the Speaker of the House, officially requesting faipules to be on that charter flight.

Vesi assured that the faipules stranded in Hawaii will be on the last repatriation flight arriving today.

According to the task force over 1,800 people stranded off island have been returned in the last seven months.

The hearing was chaired by Rep. Andra Theresa Samoa.

Members of the Task Force who appeared before the committee included the Attorney General, Fainuulelei Falefatu Alailima-Utu; Acting Director of the Department of Health, Vesi Talalelei Fautanu Jr; LBJ CEO, Faumuina Taufete’e Faumuina; Dr. Saipale Fuimaono and a representative from the Department of Health. The Task Force chairman and GAR (Governor’s Authorized Representative) Lt. Gov. Talauega was not present during the hearing.