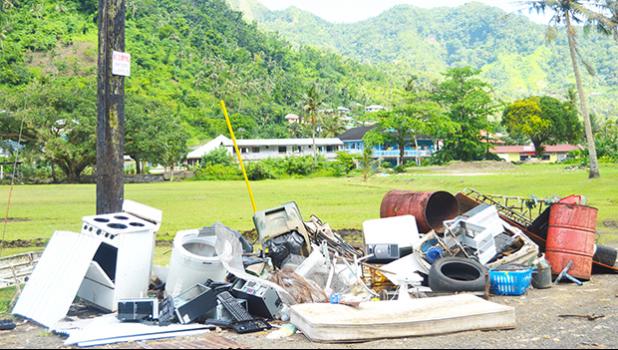 Pago Pago, AMERICAN SAMOA — A government attorney has moved to dismiss a citation against an employee of NANA’s Company, for dumping the company’s trash in a prohibited zone; but District Court Judge, Fiti Sunia had a message for the employee.

“You can’t dump your company’s trash anywhere. The only way you can dump your trash is to put it inside a plastic bag and place it inside a rubbish bin, or you can put it in a place designated by a solid waste official.

“And a solid waste official is defined as a person the government has assigned to enforce the Littering Act,” Sunia told NANA’s Company employee, Punefuolemotu Tuaolo.

The bench trial hearing was held in court yesterday after Tuaolo challenged the citation.

During the hearing, the government called one witness — the Department of Health (DoH) official who issued the citation. Tuaolo, who represented himself, presented a verbal statement to the court.

He also brought with him to court, three witnesses — all NANA’s Company employees — but none were called to take the stand.

During the proceedings, Tuaolo admitted on the stand that there was a sign, which says “No Dumping, Report violators to ASEPA”, attached to an electric pole at the area where he and his fellow workers dumped their trash on Aug. 10, 2018. However, he added, the sign is new and pretty small.

DoH official, Channel Lafua testified that on Aug. 10, 2018, their office received a complaint from Pago Pago about people dumping trash in the no trash dumping zone.

Lafua and another DoH official responded to the complaint at the malae near PC Mauga Tasi Asuega’s guesthouse.

Lafua said when they arrived, they witnessed Tuaolo and another male dumping trash from the back of a NANA’s company truck. He said he approached Tuaolo and explained to him the reason for their visit, and told him that what they were doing is illegal and against the law.

The witness told the court that after a brief discussion, Tuaolo told him they did not see the sign and the sign was too small for them to identify.

When asked by Garvey if he saw Tuaolo and fellow workers dumping trash at the area where the sign was, the witness said yes.

Garvey then asked Lafua why he didn't issue a citation for the others who assisted Tuaolo in dumping the trash. Lafua explained that Tuaolo told him and his partner that he is responsible, he is like a supervisor for the men who were there with him.

After the citation was issued to Tuaolo, Lafua and his partner took photos of the trash that was dumped in the area. The photos were presented to the court by the prosecutor.

During cross examination, Tuaolo asked Lafua why he didn't take photos of when he and his workers removed all the trash from the area and placed it back on their truck. Lafua said he did.

Tuaolo asked Lafua if he remembered telling him that day that is was his boss, the DoH director, who had instructed him and his partner to issue a citation for him. Lafua said yes.

When it was his turn to call his first witness, Tuaolo decided not to but instead, wished to testify about what happened that day.

On the stand, under oath, Tuaolo told the court it has been years since the company used this area in Pago Pago to dump their trash. He said they use this area to dump scrap metal and lumber while trash is dumped into rubbish bins on the side of the road.

“It's been years since our company has used this area to dump our trash and I was so surprised when these brothers (referring to the DoH officials) approached us that day and issued me a citation,” Tuaolo said.

He added that after talking with the two DoH officials, he instructed his boys to pick up all the trash and place it back on their truck.

Sunia had questions of his own.

“Where did you get information that this is the area where you can dump your trash?” Sunia asked.

Tuaolo said it isn't just their company using this area as a dumping ground; he said almost the entire village uses it for the same reason.

According to Tuaolo, they dump their trash in this area 2- 3 times a week, and by the end of the week, those responsible for collecting the trash come by to pick it up.

“Where does all this trash come from?” Sunia asked.

Tuaolo said it is accumulated from construction work carried out by NANA’s company.

“So, this is business trash, right?” Sunia continued. Tuaolo’s response was, “I hope so because we’re doing construction work for the government.”

A brief recess was called and when court reconvened, the government attorney moved to dismiss the citation against Tuaolo.

Garvey told the court that after further discussions with Tuaolo, the government feels that this is a new sign, and it is too small to be seen.

After granting the government’s motion, Sunia told Tuaolo that the court needs to explain something to him.

The judge said there is a law that prohibits people from dumping trash everywhere on this island, and the government has assigned some of its departments to enforce this old law.

“You can’t dump your trash at this area in Pago Pago. If you dump your trash there on Monday and pick up is Friday, the government will cite you for 5 days,” Sunia concluded.

Samoa News should point out that ASPA says that business solid waste such as scrap metal, lumber, computers, furniture, etc., including waste water from grease traps are to be disposed of separately by businesses.

Grease traps usually are emptied by the gov’t honey wagon, with a separate charge to the business; while, other solid waste as noted, have to be taken separately to the landfill and are charged a tipping fee by the ‘load’ weight or size, and business garbage bins are charged a monthly tipping fee of around $65 or for larger bins — around $373.