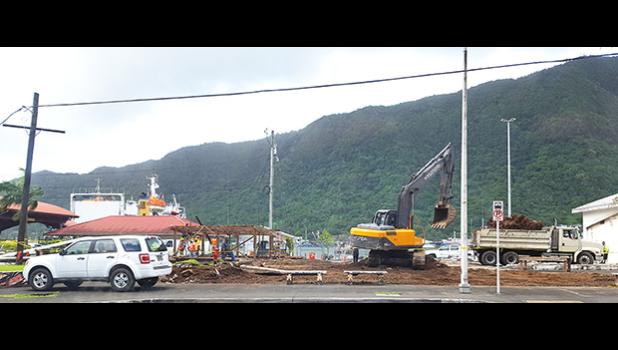 Pago Pago, AMERICAN SAMOA — The Jean P. Hayden Museum, which is listed in the National Register of Historic Places, will be getting a much needed facelift after the American Samoa Historic Preservation Office (ASHPO) got the green light to reprogram $50,000 from its FY 2016 grant funding to carry out interior and exterior refurbishments at the Fagatogo site.

"The money will go towards renovating the existing part of the museum — not including the ongoing extension project — because it is a historic property," said Historic Preservation Officer David Herdrich yesterday in response to Samoa News inquiries.

The work will include repainting the exterior, as well as the removal of interior partitions "that don't fit with the plans for the future of the museum once the new extension is done," said Herdrich, who added that they are yet to decide whether to rip out the old tile and replace the flooring, or just smooth the surface and paint over it.

Herdrich said currently, the museum features interior walls that block the windows, and the plan is to knock down those walls to improve the appearance of the building "because right now, it just looks like an old, boarded-up structure," he said.

The work will be put out for bid soon, he added.

The Historic Preservation Fund, which funds ASHPO operations, is where the money for the proposed renovation work is coming from.

"Because the museum is on the National Register of Historic Places, it is eligible to be funded for rehabilitation, if needed — and if funding is available — under the grant," Herdrich explained.

When asked about the new extension, currently being constructed by the Dept. of Public Works, Herdrich said the project is beyond their reach, as far as funding, because it is not a Historic Site.

He said ASHPO is however working with the museum board of directors to get extra money to rehabilitate the existing facility, with the hope of expanding the storage space — triple the current size — as well as renovating the upper level.

According to Herdrich, expanding the storage space is needed in order to accommodate repatriated Samoan collections they anticipate getting from off island.

"There are important collections off island but no place here to store them," he explained, adding that in addition to more space and a better appearance, they intend to install an "expensive climate control system" to maintain the repatriated collections.

He said he has already applied for a MAP grant from the Dept. of Interior, and the museum curator is applying for a TAP grant in order to acquire storage and display cases.

"The goal is to make the museum a fully functioning one, to serve the community, as well as attract and serve visitors, including tourists coming off the cruise ships who disembark at the wharf, only several yards away from the museum," Herdrich said. "It would help to have a first class museum so people can understand Samoan history. And it can benefit local school children as well as college students and adults who want to use it for research purposes."

Not much can be done to alter the exterior of the museum because, as a structure listed in the National Register, efforts must be taken to maintain the historical character of the building.

Meanwhile, work on the new two-story extension to the museum is moving forward as planned. Once completed, it will provide additional exhibit space.