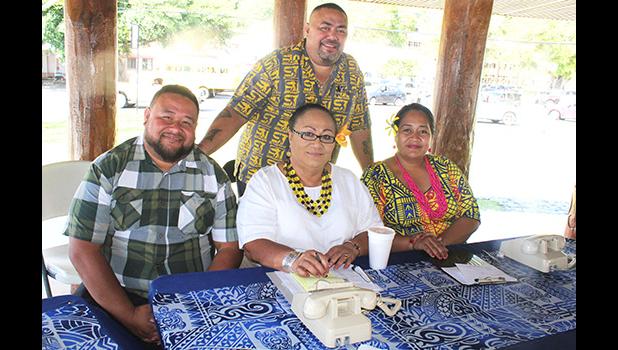 The opening ceremony was held at the Fale Samoa at the Suigaula o le Atuvasa Park in Utulei where calls, led by Catholic catechist Tomasi Ta'avili — who offered the invocation — were made for American Samoa to pray for Samoa as it battles the spread of measles, which as of yesterday had claimed 60 lives — the majority of them infants and toddlers.

Fundraising committee co-chair, who is also Secretary of Samoan Affairs, Mauga Tasi Asuega called on the entire community to work with the government to put together a donation for Samoa, and to donate with love and support for “our brothers and sisters” suffering in Samoa.

Mauga said that while the two Samoas operate under different forms of government, American Samoa and Samoa are bonded by blood, culture, and God. He added that it is important that American Samoa continues to maintain and protect its borders. He asked the Department of Health and others involved in border protection to continue with their work to ensure local residents are safe from the spread of measles.

In his remarks, the governor encouraged the public’s support - not only in government, but also churches, villages, various organizations, and the private sector. The fundraising — which runs through Dec. 20th — is accepting not only monetary donations but also canned food, packaged dry goods, and clothing.

Come Dec. 21st, Lolo said the committee will gather at Suigaula o le Atuvasa to finalize a report on the donations and share it with the community. He said he will contact Samoa Prime Minister Tuilaepa Sailele Malielegaoi, if he is able to make it to the territory for the official ‘hand over’ of American Samoa’s assistance.

“While American Samoa has been blessed, given the effective containment of the measles epidemic, Samoa is not as fortunate with the rampant spread of measles throughout the country,” Lolo said in a Dec. 2nd letter to cabinet members about the fundraising campaign.

In light of this “unwarranted and unenviable state of affairs” in Samoa, Lolo said American Samoa would not be practicing culture tenets of extending help to those who are in need of assistance.

Local businessman Taupau Tauleave Toluono is assisting by announcing on both KVZK-TV and local radio stations the names of donors and their donation amounts.

Lolo said early this week that when he was in Honolulu recently, he informed leaders of the Samoan community there to work directly with the Samoa government on what it needs. He said the ASG consultant in Hawai’i, Mufi Hannemann is coordinating all efforts there, as well as staying in contact with Hawa’ii state officials.

As the local ceremony was underway after 8a.m. yesterday, a chartered Hawaiian Airlines flight landed at Faleolo International Airport with aid and support from Hawai’i.

Hawaii News Now reported that Hawai’i Lt. Gov. Josh Green, who is an emergency  room doctor, along with dozens of health care providers were on the flight to help combat the measles outbreak in Samoa.

Green is quoted by the news agency as saying that 55 nurses and 10 doctors were on the trip, along with support staff to deliver much-needed immunizations and health care. (details on www.hawaiinewsnow.com).

UPDATE ON THE MEASLES OUTBREAK — SAMOA

The Ministry of Health confirms a total of 4,217 measles cases have been reported to the Disease Surveillance Team, since the outbreak started, according to the latest press release from the National Emergency Operation Center, dated Dec. 5, 2019 (Samoa Time).

There were 165 recorded in the last 24 hours, and included in hospital admittances are 19 critically ill children in ICU/HDU, 3 pregnant women, and 1 postnatal.

To date, 62 measles related deaths have been recorded, with 2 fatalities in the last 24 hours.