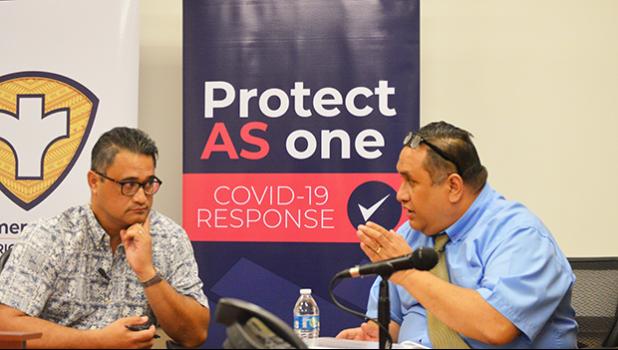 Pago Pago, AMERICAN SAMOA — Through the ASG administrative rule making process, the territorial government has adopted and implemented new emergency rules for quarantine and isolation, after the documents were filed and signed by the Secretary of American Samoa — who is also the Lieutenant Governor.

The new rules show that Lt. Gov. Talauega Eleasalo Ale signed the document on Sept. 22 and it was effective the same day.

The document also provides an explanation on what is “isolation” and “quarantine”.

According to the rules, quarantines can be initiated by order of the governor or the DoH director pursuant to a declared state of public heath emergency – under which American Samoa continues for the COVID-19 declaration.

If quarantine is ordered by the director or his/her designee, it’s based on:

•           when an individual enters an area where individuals or groups have been quarantined or isolated.

Regarding the length of quarantine or isolation, it’s based on medical investigation, including but not limited to evaluation and testing of an individual or groups of individuals.

The rules also explain that the persons who are quarantined or isolated will be assigned to designated facilities or their homes based on factors including “but not limited to”: continuing medical assessment of needs; results of medical testing; prior travel of individuals; assessment of exposure to communicable diseases; protection of vulnerable populations, including but not limited to unaccompanied minors, elderly; and disabled persons and the suitability of a person’s home for quarantine or isolation.

If the person is quarantined at home, the rules say that DoH will assess the home to determine if the person can be quarantined in a manner that prevents exposure of other members of the household.

The rules also explained that any facility designated as a place to quarantine or isolation of individuals, including homes or village operated locations — “and excepting facilities operated by the Department of Medical Services” — must be inspected and approved by DoH before use as facility.

For DoH operated facilities, the rules specified what DoH will provide: competent medical care; adequate food; clothing as needed; shelter, toilets, shower or bathing facilities; and access to outside communications.

The rules also addressed the issue of “Gifts and Donations”, saying that each facility will have a dedicated and marked area where members of the public may bring food or other personal items for individuals who have been quarantined or isolated.

Additionally there’s no personal contact between a person dropping off items and individuals who are quarantined or isolated. And the DoH director or his/her designee may limit the amount and type of items or food that maybe left in order to maintain the health and welfare of the facilities.

The Health Department notice publicly released on Sept. 22nd on the ASG website (www.americansamoa.gov), says that pursuant to local law and the authority vested with the Health Department director, the DoH promulgates Rule 003-2021 “as an emergency rule in order to implement regulations related to quarantine and isolation”.

Quarantine and isolation of travelers arriving in American Samoa has been carried out for the repatriation flights which started in February and ended last month and the current re-resumption of commercial air service, through provisions in the COVID-19 pubic health emergency declarations.

The notice states that the promulgated action by DoH creates “Chapter 7 - Quarantine and Isolation Emergency Rules” under the American Samoa Administrative Code (A.S.A.C). However, nothing in this chapter shall be construed to limit the authority of the LBJ Medical Center board of directors or its chief executive officer, to administer their own facilities.

The rule making process does not require Legislative review process or approval. The rules, states in part that the Health director finds that the use of quarantine and isolation is key to prevent the spread of COVID-19.

And the new rules became effective Sept. 22nd after being filed with the Secretary of American Samoa — who is also the Lieutenant Governor.