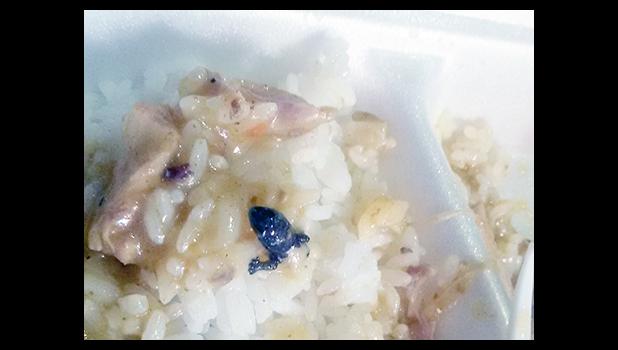 An American Samoa Community College student, who claims to have found a dead ‘lizard’ in a plate of food that he was already eating and had purchased Monday from a fast food place is hopeful that Department of Health will take his take concerns seriously.

On the other hand, Health Department offers great advice for customers who face similar situations — and that is to make sure to keep all the evidence.

Samoa News has chosen not to name the restaurant, as currently the student’s complaint is an allegation filed with DoH, which says in its response to the student that it is looking into the incident.

The student, who asked not to be identified by name, claims the ‘lizard’ was found in his plate of food purchased at the restaurant, which he and his student friends were eating in around 12 noon. He said he was already eating the food, when he found the dead lizard, inside the food.

He told Samoa News yesterday that he brought the food to the attention of a female employee of the eatery but the employee “squeezed it and said it was an onion.”

He then contacted DoH and no one showed up, which then led him to sending an email message to DoH, including four photos he took on his cell phone as evidence, because the restaurant’s employee has taken his food plate away and therefore the evidence was destroyed.

The student also said the restaurant gave him $4 to reimburse the cost of his food plate.

In his complaint to DoH, the student said a lizard was found in his food, which was bought from the restaurant. “I went to complain, and yet the lady squeezed the lizard and covered the incident by saying ‘it is an onion, sir’,” he wrote to DoH. “I am not falling for that. What I saw... was not an onion.”

He informed DoH that he had people who witnessed the dead lizard in his food plate and he’s hopeful that DoH considers his complaint.

The student gave Samoa News the email response from DoH, which thanked the student for providing “sufficient evidence” in regards to the complaint. Additionally, it’s always important for DoH to “have evidence before we set out to conduct health inspections especially due to a complaint.”

“Also, in events such as this, the fast food employee/owner will most likely return back your money and expect that you do not complain to our office. Usually, when customers take back their money, we do not bother to respond. However, in your situation we will reconsider,” according to the DoH response.

The student told Samoa News that no receipt was given to him and his friends. Additionally, he will pursue his complaint with DoH, which contacted him yesterday morning.

He is concerned with the health of students and others eating at the restaurant. He said that since the incident Monday, he couldn’t eat, as every time he tries, he starts to throw-up. So he’s only been having soup, per instructions from his mother.

When contacted late yesterday morning, Health Department official Papali’i Marion Fitisemanu, who oversees the division dealing with health inspections, said they are looking into this matter and therefore couldn’t comment further at this point.

When contacted for comments around 11:20a.m. yesterday, the owner of the restaurant in the complaint said he was checking with his employees about the incident and will call back — by press time, he still had not called back.

However, Samoa News called the restaurant around 11:45p.m. and a woman answered the phone saying “public health is here” and she couldn’t talk.

The DoH response to the student also provided useful information for the public in the event something similar happens to others.

According to the DoH email to the student, “You have all the right to complain to the fast food employee/ owner BUT make sure they do not destroy your evidence...”

“Luckily, you took photos before you addressed the issue with them. If it had not been for those photos, we would not have any reason to give them a visit,” the response said. “In addition, always ask for a receipt when you purchase food.”

“...Just make sure you have your physical evidence — e.g., the food plate — and receipt to prove that you purchased the food plate from whichever restaurant you visit. We need both, to build our case during our health inspection,” said DoH.

An official of DoH stressed the same advice to the public to “keep the evidence — don’t throw it away or give it back to the restaurant” and also keep the receipt. The official further advised that having witnesses is very important in building a DoH case.