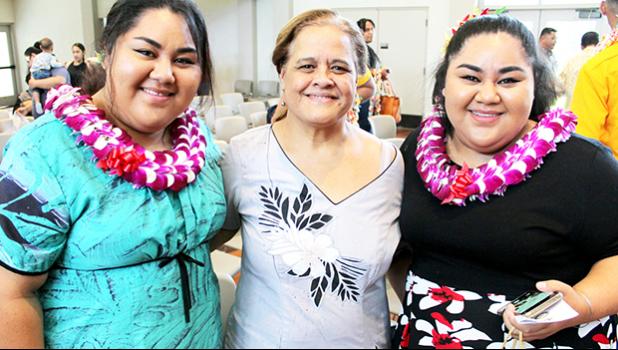 Pago Pago, AMERICAN SAMOA — The Alpha Elipson Mu chapter of the Phi Theta Kappa (PTK) Honor Society has been a part campus life at the American Samoa Community College (ASCC) practically since the College’s beginnings, and even the current pandemic has caused no interruption to the regular induction every semester of some of the College’s highest academic achievers into the prestigious nationwide Society. The most recent PTK induction, which took place in late September, saw 12 new members join the Society’s ranks.

As family and friends looked on, each inductee individually lit a candle that symbolizes the “flame of knowledge,” followed by a recital of the PTK oath as a group, and finally the conferring of each new member’s Society regalia.

Following the induction of the new members, ASCC President Dr. Makaiwi-Pato took a moment to share a correspondence she had received from the PTK headquarters in Missouri. The PTK executive administration sought to give public commendation to its many advisors nationally and internationally for their leadership role in the Society’s many chapters during the pandemic, and had written to the college requesting she give public recognition to Mr. Tuiasosopo, Dr. Seiuli and Mrs. Mulipola-Moefiainu. The ASCC President asked the audience to join her in congratulating the Alpha Epsilon Mu chapter advisors for their diligence in keeping the PTK strong at ASCC despite the challenges posed by the pandemic.

Over the years, the ASCC-PTK has made each induction a unique occasion by featuring a guest speaker with a significant tie to the Society and/or the College. This semester’s ceremony featured not just one, but two speakers, the twins Anneliese and Lottie Haleck.

Having recently returned home after graduating from the University of Hawaii at Hilo, the Haleck twins both served for several semesters with the PTK while at ASCC, and they had a number of valuable insights to share regarding the transition from on-island to off-island student life.

Anneliese and Lottie took turns describing how daunting that transition can seem to students from American Samoa away from home, but they reminded the PTK inductees, many if not all of whom may continue their education off-island after ASCC, that those who refuse to give up when things get difficult have the invaluable opportunity to shape a future of their own choice.

The PTK carries a long history of supporting academic excellence. Established by Missouri two-year college presidents in 1918, the Phi Theta Kappa International Honor Society serves to recognize and encourage the achievement of two-year college students and provide opportunities for individual growth and development through honors, leadership and service programs. Today, the PTK is the largest honor society in American education, with more than two million members and 1,200 chapters located in the 50 US states, the US territories, Canada and Germany. Since 1929, the American Association of Community Colleges has recognized the PTK as the official honor society for two-year colleges.

For more information on the Phi Theta Kappa Honor Society, visit their web page at www.ptk.org.