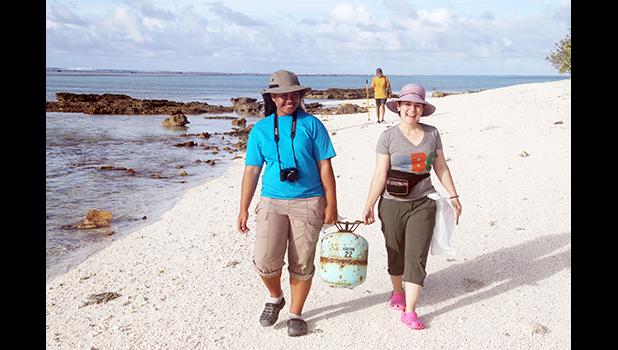 Pago Pago, AMERICAN SAMOA — In late October, the Fine Arts Department at the American Samoa Community College (ASCC) partnered with the local U.S. Fish and Wildlife Service to present the premiere of “Blue Continent”, a new short film about Rose Atoll. An uninhabited wildlife refuge, Rose Atoll is home to the largest populations of giant clams, nesting seabirds, turtles and rare reef fish in all of American Samoa. The land area of the atoll is 20 acres, while the reef area is considerably larger at 1,200 acres. Rose Atoll, also known by its Samoan name Muliava, is managed cooperatively between the U.S. Fish and Wildlife Service and the Government of American Samoa.

“Blue Continent” highlights the astounding variety of wildlife that thrives on Rose Atoll, and also explores the fragile nature of the island’s ecosystem, an environment easily disrupted by occurrences such as rising sea levels and the proliferation of marine debris that washes up on the atoll’s shores.  The narration centers on the preservation activities of Brian Peck, the U.S. Fish and Wildlife representative in American Samoa who makes the 10-hour journey by boat to Rose Atoll three to six times a year, accompanied by student assistants and guest researchers, to monitor the atoll’s animal and plant life.

For the premiere of “Blue Continent”, the ASCC Fine Arts Department filled the auditorium of the College’s Multi-Purpose Center with ocean-related paintings and other works by local artists. ASCC faculty member and renowned artist Reggie Meredith Fitiao served as the evening’s MC, and master tatau and siapo artist Su’a Tupuola Uilisone Fitiao, shared a cultural presentation with the audience prior to the film screening. Other speakers included two former ASCC students, Motusaga Vaeoso, who now works for the Coral Reef Advisory Group (CRAG) and Aveipepa Fua, who graduated earlier this year and is now pursuing her Bachelors degree in Marine Science at the University of Hawaii at Hilo.

While a student at ASCC, Fua accompanied Peck on trips to Rose Atoll, and Vaeoso made the trip post-graduation as a CRAG employee. ASCC Aquaculture and Marine Science extension faculty member Kelley Anderson-Tagarino, who has also made visits to the atoll and attended the film premiere, credits Peck with making Rose an available educational resource for students serious about gaining an understanding of the ocean environment. “Brian believes in supporting young scientists, and he knows visiting Rose is an amazing experience that can really motivate our youth to pursue a marine-related career,” said Anderson-Tagarino. “He generously offered to host interns to assist with Rose- related work, and has also provided slots for them on trips to Rose Atoll.” Anderson-Tagarino added that Peck has regularly given guest lectures in ASCC Marine Science classes.

Besides his collaborative role in ocean education at ASCC, Peck and other agencies charged with safeguarding the health of the marine environment have for many years had the support of the ASCC Fine Arts Department, with one of the results being the premiere of “Blue Continent” on the ASCC campus. Another result was the “Lalolagi o le Sami” outdoor mural display installed in February of last year on the walls of the Tank Farm in Utulei. Both Reggie Meredith Fitiao and Su’a Tupuola Uilisone Fitiao contributed murals to the collection, with Reggie’s own piece having been inspired by a trip to Rose Atoll/Muliava.

“The Fine Arts Department has encouraged students to create marine-themed paintings over the years, including a project where we teamed up with our Marine Science Department, during the time when the Alamea Crown of thorns was the focus,” recalled Meredith-Fitiao.  “Students enrolled in Painting Class were asked to paint something related to marine life that could be used in schools as educational tools. I had the opportunity to go to Muliava on a four day trip, which was an awe inspiring experience for me. This led to my becoming an artistic advocate for Muliava, and when I told Brian that I would take up that helm, we began the conversation about doing an evening of awareness-raising at ASCC. The debut of ‘Blue Continent’ provided the ideal opportunity to share with the public what an inspiring part of nature and what a valuable resource they have in Muliava.”

For their assistance in making the premiere of “Blue Continent” a success, on behalf of the Fine Arts Department chairman Kuki Tuiasosopo expressed his gratitude to the administration and staff of ASCC, Brian Peck, the US Fish and Wildlife Service, the Department of Marine and Wildlife Resources, students of ASCC classes ART 150 and ART 160, the Phi Theta Kappa honor society, the community, and to First Lady, Cynthia Moliga, for her longstanding support of the arts.

Anyone interested in seeing “Blue Continent” can find it online on YouTube, along with other informational features on Rose Atoll. For more information on Marine Science or Fine Arts classes at ASCC, see the College’s Catalog, available online at: www.amsamoa.edu

The premiere of the short film “Blue Continent”, a documentary about Rose Atoll, took place in the MPC auditorium at ASCC in late October. Reggie Meredith Fitiao (2nd right) of the ASCC Fine Arts Department was the event’s MC, while guests included (from left) Aveipepa Fua, an ASCC graduate now studying at  UH Hilo who has visited Rose Atoll; Brian Peck of the U.S. Fish and Wildlife Service, who travels to Rose three to six times a year; and Motusaga Vaeoso, another ASCC graduate who now works for the Coral Reef Advisory Group, and who has also been to Rose. [courtesy photo]