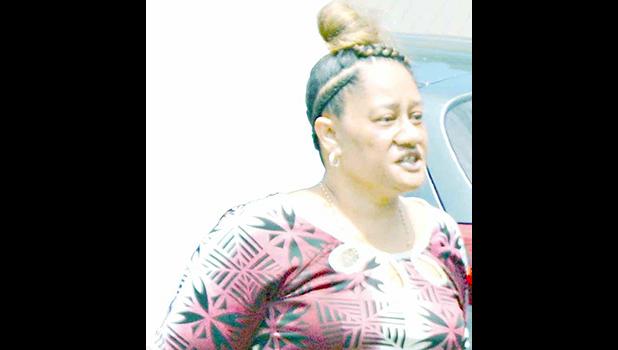 Pago Pago, AMERICAN SAMOA — Owner of the LE AUTE Sports Bar was arrested and charged last week for unlawful possession of meth and marijuana, as a result of a raid early last Wednesday morning conducted by armed detectives from the DPS Vice & Narcotics Unit, along with other police officers from various DPS divisions.

Tumuatasi Lefatia, also known as Mama was the only individual who has been charged as a result of the police raid.

Lefatia, who is serving a 2-year probation made her initial appearance on Friday afternoon at 1p.m in front of District Court Judge Pro-Tem, Gwen Tauiliili-Langkilde.

She is represented by private attorney Marcellus T. Uiagalelei while prosecuting the case is Assistant Attorney General, Woodrow Pengelly.

Tauiliili-Langkilde established her bail in the amount of $100,000.

If she posts bond, the court ordered that she remain law abiding, not leave or attempt to leave the territory, and she has to surrender her travel documents to the government’s attorney. She was also ordered not to make any direct or indirect contact with all the government’s witnesses.

Furthermore, Tauiliili-Langkilde reminded Uiagalelei that his client is on probation and she has to comply with all the existing conditions of her probation.

Lefatia is scheduled to appear in court on Wednesday this week, Sept. 19, 2018 at 11a.m for her preliminary examination election.

Uiagalelei informed the court that he reserves the opportunity to argue for a bail reduction at his client’s next hearing.

Several family members including Lefatia’s husband and mother were present inside the courtroom during her initial appearance.

The government claims that it was approximately 6:10a.m on Sept. 12, 2018 when armed detectives of the Vice & Narcotics Unit along with several other police officers executed a search warrant at the Le Aute business compound.

The search warrant was issued in connection with a felony case involving a suspect identified as Manu Lefatia who is alleged to have shot a man on Aug. 12, 2018.

Samoa News should point out that Manu is the son of Mrs. Lefatia and the silver colored pickup truck that was allegedly used to transport Manu back to the Territorial Correctional Facility (TCF) after the alleged shooting is said to belong to Le Aute.

The search was performed on one of the three structures mentioned in the search warrant. The structure in question was identified as the “Pool Hall”, which is a single story structure that has an extended overhang that houses the pool tables as well as a moderately sized residential area. The residence holds three bedrooms, two bathrooms, a laundry room, a kitchen and a common area that connects to the pool hall.

Several police officers entered the first room of the building and observed an adult female sitting up from the bed at the far right side of the room. The female individual was later identified as Tumuatasi Lefatia. Also present inside the room was another female individual and an infant.

The affidavit alleges Lefatia immediately stood up from the bed and began to put on pants in front of a night stand that was approximately 6 inches from the bed and requested to use the restroom.

Lefatia, along with the female individual and the infant were escorted outside of the room by officers. The report alleges that Lefatia was then informed by the lead investigating officer, Det. Justin Thomsen about what was happening and produced a copy of the search warrant for her to inspect. After reviewing the copy of the search warrant, Lefatia acknowledge that she understood the situation and officers immediately began the search.

Police pointed the finding out to Lefatia who, according to court documents, did not seem surprised about it or unaware that it was there. Lafetia only stated, “Does it have my name on it?”

Inside of the bedroom was also a safe that could not be opened at the scene but was confiscated until a time when it can be opened and searched.

Police searched another bedroom located in the southwest corner of the structure, and allegedly found a stamp-sized baggie of a white crystalline substance appearing to be methamphetamine. Police also informed Lefatia of the find to which she responded by asking if anyone was found in the room during the clearing process of the structure. Police told her that there was no one present in the room during the clearing process.

The search continued and officers allegedly found what appeared to be marijuana seeds and small pieces of green leaves appearing to be marijuana on a shelf inside of the laundry room.

The search continued to the pool hall portion of the structure and court documents say police found a bandana with two glass pipes commonly used to smoke methamphetamine with a white crystalline substance inside. Police also found what appeared to be a third pipe that had broken.

Lefatia was taken into custody and transported to the Central Police Station for processing.

Lefatia was informed of her constitutional rights, which she understood as reflected by her signature, however, she stated to police that she did not wish to make a statement regarding any of the items found during the search.

All evidence was turned over to the DPS’s Evidence Custodian.

On March 2015, the police raided the Le Aute Bar with 30 officers participating. As a result of the raid, Lefatia was charged with one count of unlawful possession of a controlled substance, methamphetamine, which carries a jail term from five to ten years and a fine between $5,000 and $20,000.

She was also charged with three counts of unlawful possession of a weapon and each charge is a class A misdemeanor, punishable with up to one year in jail, a fine of up to $1,000 or both.

However in a plea agreement with the government, one of the three misdemeanor counts was amended to illegal possession of firearm ammunition, which the defendant pleaded guilty to, while the rest of the charges were dismissed.

Lefatia was sentenced to one year in jail however execution of sentence was suspended and she was placed on a two-year probation with the condition that she serve 90 days in jail. She was also ordered to pay a fine of $1,000 and to remain a law-abiding citizen and she’s not allowed to be in possession of drugs.

During the 2015 search, police uncovered drug paraphernalia; three digital scales, cut up straws; pills believed to be oxycodine (an opioid pain medication, sometimes called a narcotic and used to treat moderate to severe pain), scissors with burnt tips and a glass pipe allegedly containing methamphetamine, which was found inside a pool stick case that was found in Lefatia’s bedroom. Police also found money in the amount of $4,184.