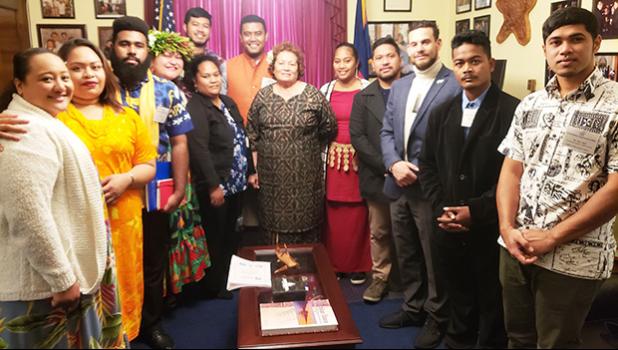 Washington, D.C. — Congresswoman Aumua Amata welcomed young business and government leaders from the Pacific during their visit to Capitol Hill. The group is in the United States through the State Department’s International Visitor Leadership Program.

“Our Pacific friendships are important to the United States,” said Aumua Amata. “I appreciate the entrepreneurial spirit of these young leaders, and it was a pleasure meeting with them. In terms of the vast Pacific Ocean, these nations are American Samoa’s closest neighbors, and key trading partners to our country.”

The International Visitor Leadership Program hosts emerging leaders in many fields, including entrepreneurs, on short-term visits to the United States, where they experience the U.S. and build relationships with U.S. leaders in their field, industry or government area.

Congresswoman Aumua Amata is welcoming Senate passage of her requested third straight year of additional funds for American Samoa’s operations. The bill passed with unanimous support in the Senate and will now be conferenced with the House bill.

It will provide about $2.6 million more than the federal budget proposal for American Samoa Government, boosting the operations budget by another $400,000. This follows similar increases Amata secured of $718,000 and $250,000 the past two years.

“This is great news for us, and builds on other recent legislation,” said Aumua Amata. “Congress has also acted twice this year to provide more Medicaid assistance for our islands, and provided $18 million in nutrition assistance through my amendments.”

With the budget increase, the bill will provide $24,120,000 for operations grants to American Samoa. That is $400,000 above the enacted level and specifically $2,591,000 above the request. The Senate Energy/Interior Appropriations bill was led by Chairman Lisa Murkowski (R-Alaska).