Alleged assault in Malaeimi raises questions about authority of aumaga 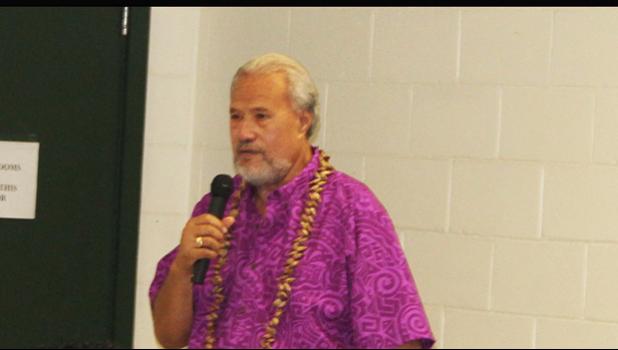 Pago Pago, AMERICAN SAMOA — It's been three weeks since a Tafuna HS senior was allegedly assaulted several yards from the front doorstep of his Malaeimi home by some aumaga members of Nuuuli village and speculations that a civil lawsuit is in the making, are already in the air.

"How do we teach our kids that bullying is never tolerated when our kids are allowed to be bullied by the village police?" This is the question being asked by Fiapa'ipa'i Tufanuaaimeaatamalii Fanene, the mother of the alleged victim.

Fia, as she is known to family and friends, has done everything she possibly could, to bring the responsible parties to justice. According to her, she has gone through the proper protocol and everything has turned out to be a dead end.

She has spoken to the police officer who responded to the call, she has visited the Office of Samoan Affairs and was referred to Eastern District Governor Alo Dr. Paul Stevenson, she had a telephone conversation with the DPS Chief of Police, she shared her story with a DPS commander, and she has approached the Nuuuli village pulenu'u (mayor).

Three weeks after her horrifying ordeal, she is yet to get a single phone call from any of the people she spoke to.

"I'm over here doing their job," she said, referring to the police. "But I am at a dead end because nobody has been arrested and no charges have been filed."

According to Fia, when she went to the DPS to follow up on the case, she discovered that no police report had been filed; but her son's name appears in a log book. She said a DPS official had referred her to one of the commanders who reassured her that he would personally look into the matter. "To this day, I still haven't heard anything, from anyone," Fia told Samoa News, adding that she even tried to get in contact with DPS Commissioner Le'i Sonny Thompson but was instead referred by Lei's secretary to the DPS Police Chief whom she was able to speak to over the phone.

"This isn't how the justice system works," Fia said. "My son was assaulted in front of our home and nobody is doing anything about it."

According to Fia, it was a warm Friday night three weeks ago, when her son was attacked as he and two of his friends were sitting in a small makeshift market stall in front of their Malaeimi home.

(Samoa News points out that the Nuuuli village sa - curfew - extends all the way to Malaeimi, only several yards west of the Fanene home, at the ASCC parking lot. The sa is carried out twice - both during nighttime hours - during which truckloads of aumaga members ride down the main road, to the sound of the conch shell which signals that the sa is in effect).

Fia said on the night in question, she, her husband, and their other children were watching TV in the house when her daughter ran in crying, saying her brother had just been assaulted by the Nuuuli aumaga.

Immediately, Fia said, they rushed out of the house to discover that her son was bleeding from the head, and her daughter had a swollen lip and marks around the body, as she had jumped on her brother to shield his body from the assault.

The family immediately headed to the Tafuna Police Substation to report the incident. While there, statements were taken from both Fanene kids. The paramedics even showed up to render medical assistance as Fia's son had multiple lumps on his head.

Fia said the statements provided to police that night included a description of the attackers, and the vehicle that transported the alleged culprits. The next day, Fia said a call was made to the cops to meet them at the gathering place for the aumaga, which is in front of CBT in Nuuuli, so they can pinpoint the attackers. She said about a half dozen cops were there, but they appeared to be "scared". She said although her kids identified some of the faces they recognized from the attack the night before, the feeling they got from the cops was, "let it go and keep the peace."

Fia said she was not happy with the response she was getting from the cops. "No good will ever come from this if we let it go. Something needs to be done to stop this kind of behavior," she said, adding that on the night of the alleged assault, her son did nothing wrong. He wasn't being disorderly, he wasn't drunk, he wasn't disturbing the peace. The only thing he did was be outside during sa, according to Fia, who said the village aumaga usually go out to patrol during sa armed with bats and sticks. "Why the need for all the weapons?" she asked.

She said at night, the aumaga have been known to shine lights into people's homes in that area.

So how much is too much when it comes to enforcing the sa? Samoa News approached Secretary of Samoan Affairs Mauga Tasi Asuega for a comment, as his office oversees matters pertaining to the villages. Mauga's response: "The aumaga has absolutely no right to assault anyone. The most they can do is make him sit down and come before the village council but once they lay a hand on anyone, it's assault."

Mauga said he would personally speak to the Nuuuli pulenu'u and the ranking matai of Nuuuli about the situation. He added that the victim's mother has every right to pursue legal action.

"Once a person puts their hands on you, it's a matter that needs police attention," said a former judge who spoke to Samoa News last weekend when asked for a comment.

"There's a serious problem here and everyone needs to realize that there is a thin line between right and wrong," Fia said. "I'm not trying to bring the village down, I am proud to be from Nuuuli, proud of who my father is: Touli Laau Penerosa Toleafoa Fanene. But this is something that needs to be addressed."

She said when she approached the village mayor, he told her that this isn't the first time this has happened, as he'd heard of other incidents like it. "What message are we sending our kids?" Fia asks. "It seems as if bullying is being influenced by the community."

"My kids - everyone's kids - have the right to feel safe in their homes, in their backyards, in their village. There's a saying that it takes a village to raise a child. What kind of village condones such behavior?" Fia continued.

She said according to the doctor who treated her son on the night of the incident, the boy is fortunate because although he was hit on the head with a rock, and sustained body punches, there was no internal bleeding, which was the biggest concern for Fia and her husband.

For now, Fia said her biggest worry is that her son who attends Tafuna HS, and her daughter at ASCC, will be singled out by angry villagers seeking revenge.

Samoa News understands the Fanenes are in the midst of retaining legal counsel and they will be pursuing the matter "for our kids, for us, for everyone else's kids."