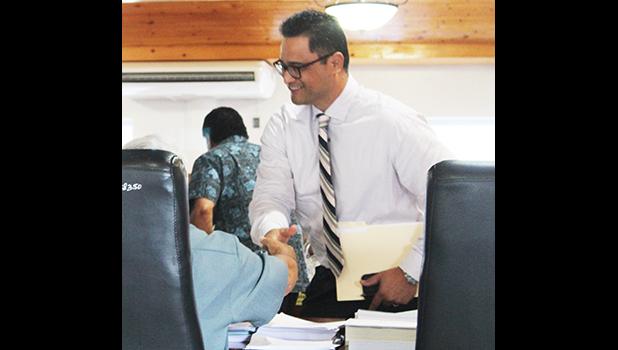 Pago Pago, AMERICAN SAMOA — At the conclusion of a Senate committee hearing last Friday, Talauega Eleasalo Va’alele Ale officially announced publicly that he was stepping down as Attorney General, but he did elaborate on his future plans.

(But senators have known that Talauega planned to be Lt. Gov. Lemanu Palepoi Sialega Mauga’s running mate in the Nov. 3rd election).

During a cabinet meeting early last month, Gov. Lolo Matalasi Moliga announced that Talauega would be stepping down from his post after he argues ASG’s case at a federal appeals court in early February.

“As we have discussed, this letter formally confirms my intent to resign from the Office of Attorney General, effective Feb. 15, 2020,” Talauega wrote in a letter dated Feb 7th to the governor with copies sent to Fono leadership, and Chief Justice Michael Kruse. “It has been a great honor and privilege to serve the people of American Samoa and your administration these past six years as Attorney General,” he continued. “Thank you for the opportunity and trust in me.”

He expressed sincere appreciation and thanked the Senate and its leadership for their trust and confidence in him, by twice-confirming him to the AG post.

He apologized if his service in the past years was not in accordance with their views. But, he added, the son of Alataua County, who has roots going back to Manu’a, now returns home to his county.

Committee chairman Nuanuaolefeagaiga Saoluaga Nua informed Talauega that it’s the wish of senators that he remain the AG. However, he wished Talauega the best in his future plans.

There was no mention during this exchange, of Talauega running for public office.

At the Lemanu and Talauega gubernatorial team campaign rally last Saturday, Lemanu informed the audience that Talauega stepped down as AG, as of last Friday.