After the storms — potholes become more of a traffic hazard 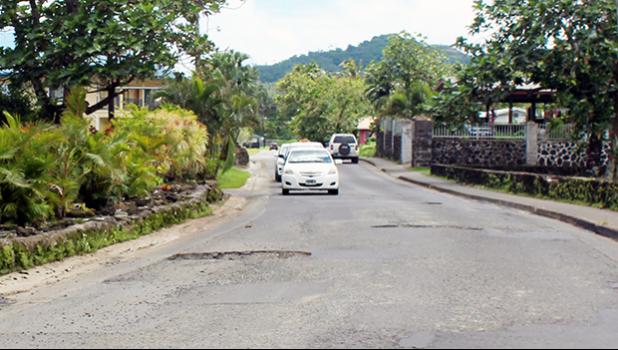 Pago Pago, AMERICAN SAMOA — Two deep potholes —one after the other — on the Fagaima road seen in this photo taken Monday afternoon, in front of the Methodist Church at Fagaima force drivers to take drastic turns and maneuvers to avoid them.

Some drivers have the courtesy to give one side of the traffic time to go through, to avoid the potholes.

Further up on the same road — heading to Kokoland — are two other deep potholes, in front of a store. The potholes have gotten wider and deeper following heavy rain last week on this road, which is heavily traveled by many vehicles. It becomes even more of a traffic hazard when there’s flooding and the potholes can’t be seen under the water.

As the weather improved Monday, Tualauta Rep. Larry Sanitoa requested the Department of Public Works for their assistance in repairing several dangerous potholes, including the ones in front of the Methodist Church.  “These two pot holes are next to each other and on both sides of the road. Motorists have to swerve to avoid the pot holes in this area,” he wrote to DPW.

Sanitoa said there are several dangerous pot holes also on the road into Lions Park, especially in front of the Territorial Correctional Facility.

A long standing problem is also the drainage in Fagaima, as the water is not draining and receding like before.

The road in front of the cemetery and Fatuoaiga Montessori School, also has a large pool of water that is not draining and it has become the swimming site for frogs during the early evening hours.