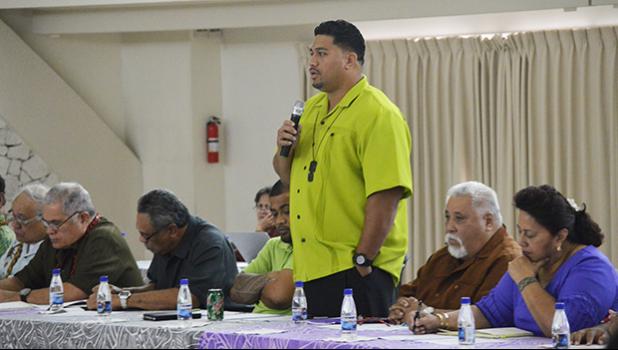 Pago Pago, AMERICAN SAMOA — The prosecution has filed four additional charges against Dept. of Youth and Women's Affairs (DYWA) director Jonathan Fanene, who has been released after posting a $100,000 surety bond.

Fanene appeared in District Court yesterday morning for a preliminary examination election, which has been continued to next Monday, June 10th.

One of the issues raised during yesterday's proceedings was the location of Fanene's passport, which is to be surrendered to the AG's Office. The passport cannot be immediately located, but a copy of Fanene's birth certificate was handed over to prosecutor, Assistant Attorney General Christy Dunn.

In addition to making no direct or indirect contact with the victim in this case, Fanene is also not to leave or attempt to leave the territory without prior written permission from the court.

Until his passport is found, Judge Elvis P. Patea has ordered Fanene to report to defense attorney Marcellus Talaimalo Uiagalelei's office and sign-in there on Tuesdays and Fridays.

According to the criminal complaint, Fanene's wife Lori walked in to the DPS Tafuna Substation on Wednesday, May 29th to file charges against her husband. She said her sister-in-law had informed her that Fanene was "seen in Hawaii with another woman," and Fanene had a 'hickey' on his neck.

The victim told police she left home and went for a drive, and that's when her husband texted her and told her not to return home. The victim said she went home nonetheless, and approached Fanene about what she had been told.

According to her, Fanene "flew into a rage and proceeded to assault his sister with his hands." The victim told police that she tried to run for the door, but Fanene threw a chair at her, grabbed her, and "dragged her" into the house.

Fanene then allegedly instructed their 9-year-old son to "grab the bat" but the boy brought back a pipe and a wooden stick.

The victim told police these were what Fanene used to assault her and her sister-in-law.

According to Lori, she tried 'numerous times' to get away from Fanene but he would “catch her and beat her up.” At one point, she said, she got on the couch to distance herself from him but he assaulted her with a pipe. She said she ran and tried to seek cover, but he wouldn't stop.

The victim told police that she was able to grab and remove the pipe and stick from Fanene, but he “grabbed a commercial grade extension cord, wound it around his hand, and proceeded to whip her and her sister-on-law with it,” according to court documents.

She said that in-between the beatings, Fanene would stop, as if "taking a break" and would "lecture them" before resuming the physical onslaught. According to the victim, the beatings went on for four rounds, with three "breaks" in-between.

Lori told police that at one point, Fanene hit her so hard that she "blacked out" momentarily, and when she came to, she could hear herself gasping for air. She said she was lying on the ground and could see her husband's feet "walking around in front of her."

The victim told police she thought, "he was going to kill her right then and there."

She added that during one of Fanene's "lectures", he allegedly told them that he "enjoys hurting people; he can beat them all day."

When the beatings ended, the victim said her husband told her to get out, get on the plane and leave, he wanted a divorce, and he's taking the kids, according to the criminal complaint.

Lori said her husband told her to get his gun, and that's when she fetched a .357 — in their room, next to the bed — and gave it to him. Fanene allegedly took the gun and left the house.

The affidavit says that with consent from the victim, police were able to question the couple's 9-year-old son who confirmed that his father beat his mom and his aunt on Sunday, May 26th, and he saw his dad "hit and drag his mom into the living room."

The boy told police that his father instructed him to get the bat, but he couldn't find the bat, so he grabbed a pipe, a golf club, and a broom handle, according to the criminal complaint.

He said he saw his dad using these things to assault his mom and his aunt. The boy said, "He beat them as hard as he can"…"My mom told him to stop, in a crying way."

He also told police that his father owns four guns, which he described as “shotgun… shotgun… handgun… SMG”. He further drew pictures of the guns, upon police request. Police say in the affidavit that the drawings looked like the guns he had described to them.

With the new additional charges, Fanene is facing the following:

If convicted of all charges, Fanene is facing the maximum punishment of 71 years behind bars.

On the day the victim reported the matter, photographs of her injuries were taken. Police observed "multiple contusions of varying sizes encompassing the area on the sides of her body, from her shoulders to ankles." She also sustained injuries on her buttocks, the upper portion of both arms, and her lips.

Fanene was arrested on Friday, May 31st per an arrest warrant and transported to the TCF where he spent the weekend, prior to his initial appearance in District Court this past Monday.

The victim gave police consent to search their Nuuuli home, which netted a black Taurus handgun case, a Taurus .357 owner's manual, and 34 rounds of a .38 special which is compatible with a .357 revolver.

Two shotguns were also found, with one 12-gauge shotgun round and 25 .9mm rounds.

When asked to provide background regarding the 'history' of their marriage, the victim said their first domestic violence incident transpired when Fanene assaulted her back in 2009 while they were in Kentucky, and she was pregnant with their son.

During another incident, Lori said she caught Fanene on the phone with another female and when she confronted him about it, he "got mad and grabbed her, before throwing her against the wall. He then proceeded to strangle her with both hands, to the point where she couldn't breathe."

She told police of another incident whereby he kicked her and pulled her hair.

The victim said rumors of infidelity were heard throughout the years and at one point, one of her male co-workers approached her about Fanene having an affair with his wife.

She then recalled a time in early 2017 when she said she was held against her will by Fanene, at their Malaeimi home. According to her, Fanene put a .357 handgun to her head and later fired in her direction, while she was seated in front of him.

Lori said there was a time when she saw an email Fanene wrote to another girl and when she confronted him about it, Fanene allegedly stomped on her head, pulled her hair, and kicked her out of their home. She then walked to her sister's house and stayed there for the night.

The next day, Fanene invited her to lunch and they picked up food from Utulei. The victim said Fanene's demeanor "changed" after they grabbed lunch and he 'sped off' to their Malaeimi home. When they arrived. Fanene "proceeded to lock all the doors of the house and closed all the window blinds. He then confronted her "about her having an extra marital affair with a co-worker. She said Fanene was sitting on the bed with a .357 revolver while she sat on a chair in front of him.

Lori told police that Fanene "hit her many times" and when she tried to run for the door, he caught her and forced her on the chair, with the .357 revolver pointed at her head.

The victim said she heard the gun discharge one time, and she felt something hot making contact with her back, momentarily. She concluded that the bullet had ricocheted off the wall behind her and struck her back. She said the "ordeal" only came to an end because she had to pick their children up from school.

There were other instances Lori shared with police, including an alleged incident earlier this year, whereby Fanene "kicked her on the leg and then kicked her in the stomach" after she refused to do something for him. The victim said she got up and tried to walk out, but Fanene allegedly threw a wine bottle at the wall and told her to 'clean it up.'

(Samoan language version of this story on Monday)