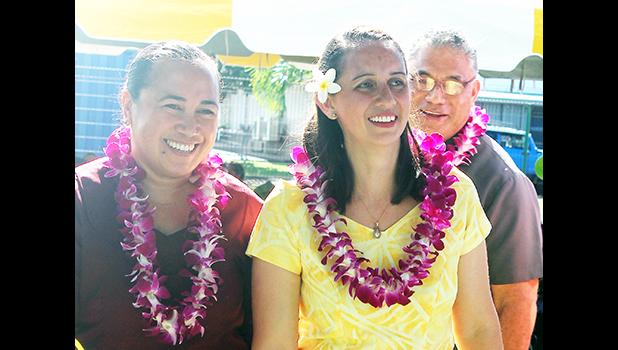 First Lady: “We are here to remind our loved ones … you are not alone”
By
Fili Sagapolutele
fili@samoanews.com

Pago Pago, AMERICAN SAMOA — The American Samoa suicide and mental health “988 Helpline” was officially launched last Friday morning, where First Lady, Ella Pelefoti Mauga, who delivered special remarks, encouraged the community to, among other things, “seek out ways we can help each other and fight the challenges of suicide.”

The 988 center — a collaborative effort between the Human and Social Services Department (DHSS) and the Health Department (DoH), and other partners, is temporarily located at the Haleck Professional Building, where the launching ceremony was held.

In her speech, the First Lady expressed appreciation to everyone for their hard work in moving the 988 Helpline to reality. She thanked DoH and DHSS directors and their teams and “all our essential workers who have made our island a better place and a safer place to live through their hard work, their kind, compassion and love for our people.”

“I also want to thank God for his spiritual guidance in our lives, for I know that somewhere, someone is taking their final breath. I thank Him for allowing us this opportunity to affect and impact change,” she said.

“We are here to remember the lives of our loved ones who have been affected by suicide, due to the hardships and the pain they have faced. We are saddened by their absence and we are here because they will live on in the work that we do from now on,” she said.

“Today is a day of hope. We are here to remind our loved ones — young and old, near and far — that you are loved, you are not alone,” she declared and read a quote from Brannon Bercher — “Talking about mental health is not attention seeking. People die in silence every day, due to this judgment and then people finally say ‘I wish they spoke up’.”

The First Lady told the gathering that “it is our duty and responsibility to engage in conversation with our families, our villages, our church communities, especially our parents and seek out ways we can help each other and fight the challenges of suicide.”

“We must establish a safe bubble that fosters understanding, love and trust without judgment,” she said and pointed out that it’s “not an easy subject for most people and some would even feel that it wouldn’t happen to someone that they love.”

But the role of government, through DoH and DHSS suicide Hotline 988, “is to make this conversation easier for anyone who is dealing with problems. And to share them, so that the burden is shared together and not alone,” she said.

The First Lady was on the program to cut-the ribbon, but instead handed  the honor to Mrs. Ale.

Through the grant, the DHSS, in partnership with DoH along with other agencies and non-profit organizations, will participate in the development of strategic plans for American Samoa in preparation for the projected infrastructure needs, volume growth, and access to the Lifeline’s new 9-8-8 number.

“Wow, there’s so many of you and I am alone. Can you please save me before I take my own life,” was the message delivered by DoH deputy director, Vesi Talalelei Fautanu to the audience, as he shared background information on this project during the ceremony. He repeated the same message at the conclusion of his remarks what many who have dialed for help say.

He said the grant award for this important program was $135,000, which was awarded early this year and the performance grant time frame is Feb. 1, 2021 to Sept. 30, 2021. “This grant will improve vital crisis services, the advocacy of suicide prevention efforts and reduce stigma about mental health,” he explained.

March this year was when the collaboration agreement between the directors of DHSS and DoH was reached, and to move forward in establishing what is necessary for this much needed service for American Samoa, he said.

While there is still much work to do, as members of the governor’s suicide prevention task force, working groups, steering committee and support staff, “we must merge in such a way that has never been done before,” he said.