Why ‘Mayor Mufi’ wants to be Mayor Mufi again 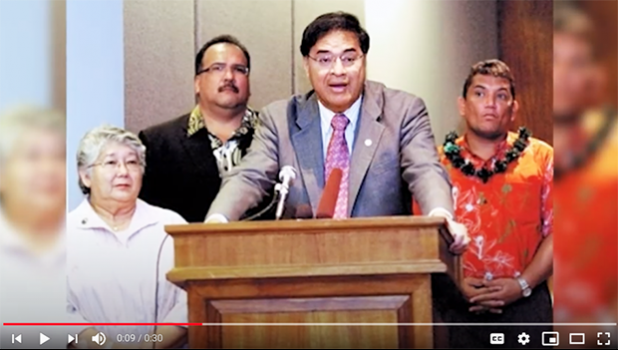 By
Chad Blair
Source: Honolulu Civil Beat
The former Honolulu executive is betting that voters will want a tested leader in these testy times.

Honolulu, HAWAII — To watch the 30-second political commercial titled “A Kid from Kalihi” is to be reminded that Mufi Hannemann is a familiar face with a long and impressive pedigree.

Narrated by the candidate for Honolulu mayor himself, the spot features a very young Mufi with his late parents, a teenage Mufi playing hoops at Iolani School, a college-age Mufi at Harvard, a young working-adult Mufi at the White House (with clips of Mufi with Ronald Reagan and George H.W. Bush) and an early-career Mufi with George Ariyoshi and John Waihee.

A picture of Mufi meeting Barack Obama is included, too, although to the best of my knowledge Hannemann never worked for Obama’s White House. There is also no mention of Jimmy Carter and Bill Clinton, who Ballotpedia and Wikipedia tell me Hannemann did work for.

But the larger point is that Hannemann works well with both sides of the aisle, an important message in running for a nonpartisan office.

“I’d like the chance to serve you again,” Mufi says after the video shows him being sworn in after his 2004 mayoral election. “If you put me back in my old job, I will put you back in yours.”

The themes in “A Kid from Kalihi” are heard as well in three other 30-second spots. They all feature the same musical soundtrack (a pleasant, upbeat tune) and many of the very same images, including Mufi being sworn is as mayor and Mufi walking tall with men in construction vests.

But each ad has its own unique content, too.

All four ads end with a smiling candidate walking toward the camera in a suit and tie and the end screen plugging “Mayor Mufi” and MufiforHonolulu.com. He is so well known that there is no need for a surname.