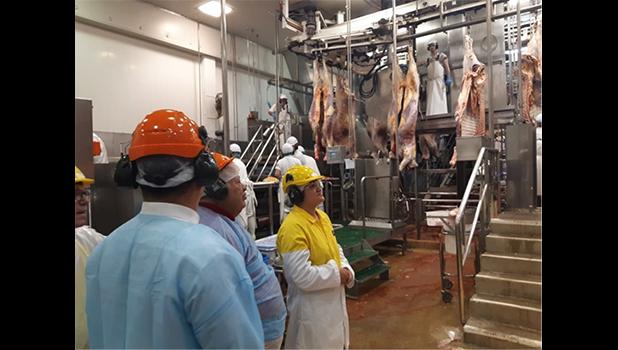 Balclutha,, NEW ZEALAND — Samoa workers employed by the Silverfern Meat Processing Plant in Balclutha, New Zealand hosted Prime Minister Tuilaepa Lupesoliai Dr. Sailele Malielegaoi and his delegation while in Dunedin at the invitation from the University of Otago earlier this month.

Balclutha is very close to the southern tip of New Zealand’s South Island, and despite the chilling temperature in the South Island, the Prime Minister braved the cold weather and travelled for more than an hour from Dunedin to meet the management and our Samoan workers working with the Silverfern Farm.

Silverfern is the home to 60 Samoan workers who have been hired under the Approval In Principle (AIP) arrangement for more than 10 years now.

“It’s very cold here, but I was not going to return to Samoa without coming to visit you,” says the Prime Minister in his address to the Samoan workers.

“The government had worked hard to secure these jobs for you and I want to see it continue so that more of our people will have a share of this blessing you are now enjoying.”

“I want you to work harder, and stay away from the alcohol.

“I know alcohol is the cause of all disputes amongst you and you know that quite a number of those who were given this opportunity had been sent back to Samoa because of alcohol related offences,” added the Prime Minister.  “The government will continue to enforce its zero tolerance policy against misdemeanor due to alcohol consumption or bad behavior. There will not be any second chances.”

Silverfern employs the largest number of Samoan workers and they have worked closely with the Seasonal Employment Division which is now based with the Ministry of Commerce, Industry and Labour MCIL.

The Prime Minister and delegation were given firsthand experience during their visit which included Silverfern’s Slaughter and Meat Processing Plant.

The work requires strict concentration and coordination right from the slaughtering of cows to the packing of the meat.

Silverfern farms slaughter and process 800 cows and 10,600 sheep a day.

The company exports meat to Europe, Australia and the United States.

The company recruits every year from Samoa.