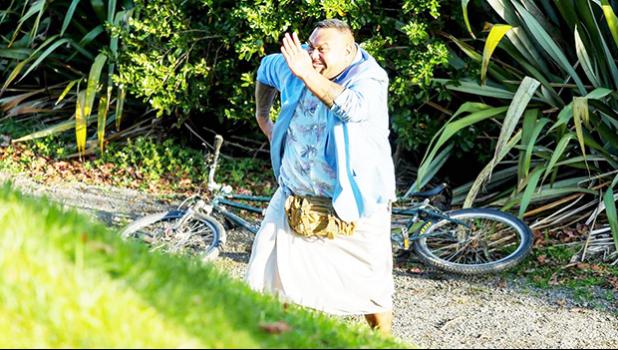 Remember the name Bob Titilo – because he's about to blow up big time. As played by one-half of The Laughing Samoans' – Tofiga Fepulea'i –Titilo is a PI wannabe P.I.

The 40-year-old, who still lives at home with his elderly mum, finally gets his big opportunity to prove his detective skills when he's enlisted by Samoan seasonal worker Alama (Vito Vito) to help find his brother in the new movie Take Home Pay.

After a fruitful period picking Kiwifruit, Alama and Popo (former What Now presenter Ronnie Taulafo) are due to return to Samoa when Popo suddenly vanishes – along with their combined earnings. Miss their scheduled flight and they won't be allowed to come back – ever.

Alama's increasing desperation leads him to Bob Titilo, who, convinced that Popo has been seduced by the bright lights of Auckland, begins to use his "special set of skills" to find his quarry.

Take Home Pay is another fabulous South Pacific crowdpleaser from the team who gave us Three Wise Cousins and Hibiscus & Ruthless — SQS (better known to his mum as Stallone Vaiaoga-Ioasa).

Take Home's story feels a little simpler and shaggier than the top-notch Ruthless, but this truly benefits from impressive production values, winning charm and the tour de Force that is Fepulea'i. A kind of Inspector Clouseau-esque character, if played by a combination of John Candy and Harold Sakata (Goldfinger's Odd Job), his Bob Titilo offers up seemingly endless delights. Bob steals every scene that he's in (and fortunately he's in Take Home Pay a lot more than you'd first expect).

Throw in a trio of pitch-perfect cameos from Sam Neill, Oscar Kightley and David Tua and Take Home Pay is well worth spending your hard-earned readies on.