'The Rock' shows up to lend support to Hawaii protesters 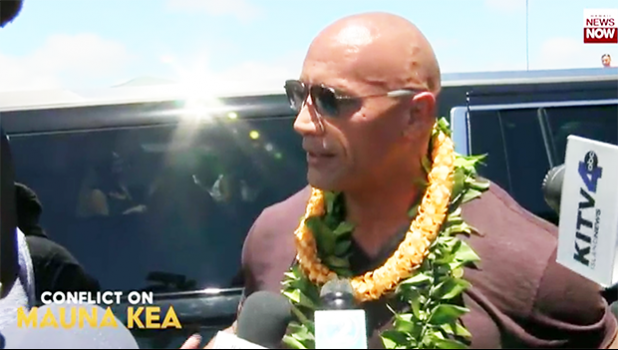 Mauna Kea, HAWAII - Dwayne “The Rock” Johnson got a massive welcome Wednesday during a visit to the TMT protest at the base of Mauna Kea, during which he met with Hawaiian elders and called for “leadership with empathy” to find a peaceful resolution to the conflict.

“I wanted to come here and see our people and stand with them and support them,” Johnson told reporters. “What I realized today, and obviously I’ve been following this for years now, is that it’s bigger than a telescope. It’s humanity. It’s culture. It is the people of Polynesia who are willing to die here to protect this land. It’s not about stopping progress. It’s about respecting a culture.”

Johnson’s visit came on the 10th day of the large protest at the base of Mauna Kea, and on the heels of the governor’s decision to hand over authority of the state’s response to the protest to Big Island Mayor Harry Kim. The governor also visited the TMT protest for the first time Tuesday night.

At the base of Mauna Kea, Protesters ― led by a group of kupuna ― are blocking TMT construction equipment from getting to the planned site for the $1.4 billion, 18-story telescope at the summit of the mountain.

Opponents of the telescope say Mauna Kea is sacred and mismanagement over the years has amounted to desecration.

TMT supporters point to efforts underway to mediate the impact of the Thirty Meter Telescope.

“The Rock” is the highest-profile celebrity to visit the protest camp, though other big names have weighed in on the conflict.

At the protest camp Wednesday, where he spent about an hour, he was greeted with lei, chanting and hula performances. He also spoke to a number of protest leaders and kupuna.

Johnson, who is half-Samoan, spent much of his childhood in the islands and visits Hawaii frequently.