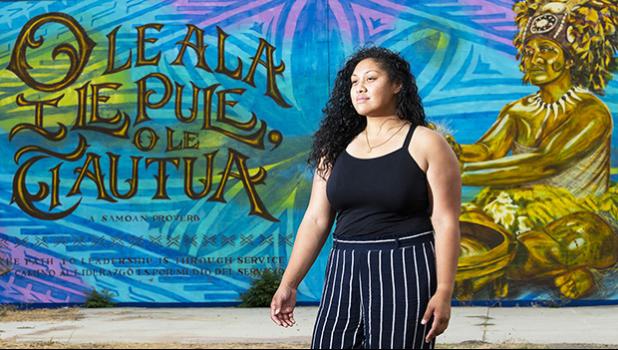 Long Beach, CALIFORNIA — In a vacant fenced-in North Long Beach dirt lot just a few doors down from where Leah McKenzie grew up, a mural depicting the 21-year-old now emblazons a bordering wall once used by neighborhood kids to play handball.

The mural, part of an effort to beautify blighted areas throughout the city’s Northside, depicts the recent Cal State Long Beach graduate sitting cross-legged in traditional Samoan attire, exposing a special tattoo that the artist, fellow Samoan Jason Pereira, wanted in his piece.

“[It’s] meant to identify me as the person my family goes to for love, for nurturing, for care,” McKenzie said of the tattoo.

It wasn’t easy to find a woman with the “malu” tattoo, which required the blessing of her family. There is only one tattoo artist in California—A-Town Tattoos in Garden Grove—that is trained in the Samoan technique used by a specific family, the Sulu’ape.

The method includes using two sticks that penetrate all seven layers of skin, as opposed to a modern-day tattoo gun that goes only through the first layer of skin. McKenzie went to A-Town last November for her tattoo, which ended up being an eight-hour-long session.

While McKenzie said it was one of the most physically painful experiences in her life, the support of her family and friends during the occasion helped ease the process.

“What helps, in our tradition, our entire family comes for those eight hours and they sit around you and they sing and they pray and are just there,” McKenzie said. “It really gets you through it.”

Pereira told the Post in January that he wanted to highlight the Samoan culture in his mural, including the pillar principle Tautua, which means to serve.

The mural features McKenzie preparing a sacred drink as part of the ava ceremony, which is prepared for a special guest or occasion. The duty of making this drink is considered an honor and tasked to a girl, such as a princess, she said. The mural also includes the Samoan proverb O le ala ile pule o le Tautua (the path to leadership is through service) along with its Spanish and English translations.

The mural is located at 6850 Long Beach Boulevard. Read more at The Long Beach Post