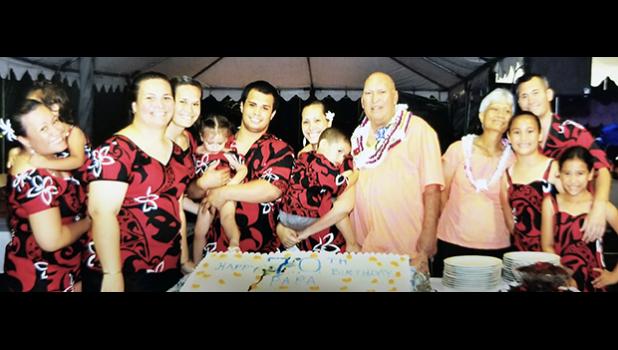 Final funeral services for former lawmaker and businessman Galumalemana William "Bill" Guthrie Satele will be held tomorrow at the Vailoatai CCCAS. The longtime government servant passed away on Oct. 13th at Tripler Army Medical Hospital in Honolulu, Hawaii. He was 74.

"Our father will always be remembered for his tenacious spirit and his unconditional love for his family. Whether in business, sports, or family, our father was determined to get things done with a bold sense of resiliency to always do better," reflected Galumalemana's daughter, Christa.

Many who knew him have described Galumalemana’s life as that of a faithful servant.

He attended St. Theresa (Leone) and Marist Brothers (Atu'u) before moving to Colorado to continue his education. After serving in the US Air Force for 4 years (which included a tour of Vietnam), Galumalemana returned home to American Samoa and in 1966, he ventured into self-employment.

Prior to his passing, he was the president and owner of Samoa Sports, Inc. (the first exclusive sporting goods store in the territory), as well as BSA Inc., dba Taputimu Farm (the first and longest running local egg farm). He was also a general contractor and involved in the construction projects of the old courthouse, museum, the former ASTCA building, and the Territorial Registrar's office.

At the village level, he built a playground in honor of his mother Salamasina Teutusi Satele Molio'o.

He was very involved with the Oceania Tennis Federation and the American Samoa Tennis Association (ASTA), for which he served many terms as president. He was a past member of the Rotary Club, Lions Club, Democratic Party of American Samoa, Lavalava Golf Club, Chamber of Commerce, and he was part of a group of local business people who brought ANZ Bank and Hawaiian Airlines to the territory. He also helped form the Chamber of Commerce.

"My Dad was an exceptional man and the way he lived his life was admirable," Christa told Samoa News yesterday. "Everything he did in his life, he did it from his heart - he did it with love. I have the greatest honor of being one of his daughters and witnessing his sleepless nights so that he could give of himself, continuously."

According to Christa, her father is known throughout the island as a "man of dignity who was extremely outspoken because he believed in a better future and always wanted to do right by our people."

But, she continued, "No one really knew him quite like us."

"Dad gave us a great life, he worked effortlessly and tirelessly in order to provide us the very best. He taught us the importance of hard work and he made us work! Whether it was the family businesses or projects he conjured up, he ensured that we were all put to work and understood that if we ever wanted anything in life, we had to put in the labor to achieve it."

Christa said her dad consoled them through rough patches in their lives and never failed to tell them to "keep going."

"He was always forthright in his love for us and when we needed tough love, he never failed to give that because he wanted to teach us to be resilient and triumphant - characteristics that he exhibited so well. There is no denying that all that we have as a family was everything that Dad worked for. He put his blood and his sweat building all that we have, because he wanted that not for himself, but for us. He always thought about the future, he planned for it, and executed all strategies to the best of his ability so that everything was in place."

She concluded, "Although Dad may not be here physically, I still feel his presence. In all that we see, hear, and do, he is present - especially here at home."

Samoa News extends its sincerest condolences to the Satele family for their loss.