Five local graduates moving on to bigger and better things 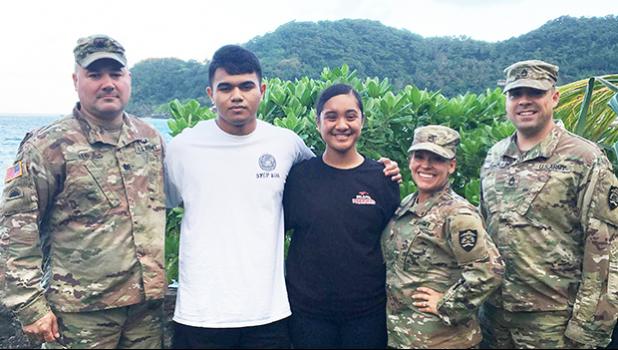 Pago Pago, AMERICAN SAMOA — The Oregon Army National Guard (ORANG) has done it again! Thanks to 100% tuition assistance to attend Southern Oregon University (SOU), five American Samoans are on their way to a brighter future.

McMoore, a 2019 graduate of South Pacific Academy, enlisted as an 11B, Infantryman. He will attend Basic Combat Training (BCT) at Ft. Benning, GA. Training as an 11B will help him excel in the Reserve Officers Training Corps (ROTC), as ROTC training is directly related to infantry training.

“I am personally looking forward to basic training. Although I know it will be hard, I just know for a fact that it will all be worth it, once I finally graduate,” McMoore said.

Porotesano graduated from Samoana HS earlier this year and enlisted after his cousin, Tamamanuatele Pula, enlisted in May. Porotesano will train to be a 92A, Automated Logistics Specialist. He will attend BCT at Ft. Jackson, SC.

Tuatu “TJ” Porotesano (2nd from left), a 2019 Samoana HS graduate, enlisted into the Oregon Army National Guard and will be attending college at Southern Oregon University (SOU) under a partnership that provides 100% tuition assistance, among other things. [photo: courtesy]

According to SFC Sheri Hoddle, recruiting and retention NCO of the Oregon Army National Guard, these soldiers will endure a 10-week Basic Combat Training course and then progress on to their Advanced Individual Training (AIT), where they will learn their Military Occupation Specialty (MOS).

Upon graduating, the military will fly them back to SOU where they will begin college.

“I have worked closely with these students and their families to enlist them into the Oregon Army National Guard so that they can attend college in Oregon,” SFC Hoddle said. “Once they are enlisted, the Oregon National Guard provides their flight to the airport nearest SOU, where we pick them up and take them to SOU for the weekend, before they ship out to BCT.”

During this time, the enlistees meet with an academic advisor to register for classes, tour the campus, and meet other fellow American Samoan cadets. “We then provide transportation to the airport for their flight to Basic Training. This allows for the new Soldiers/Students to successfully ship to training while also preparing them for their return to Oregon, and the immediate start of college,” Hoddle said.

She continued by saying that aside from being a full-time college student, every enlisted soldier will serve in their unit (based on the MOS they choose upon time of enlistment) for one weekend each month, and approximately two weeks each summer. During these times, they will be executing skills they obtained during AIT, to help their unit operate properly.

Hoddle said the enlistees’ daily lives at SOU will integrate with other American Samoan student-soldiers who have gone through Basic Training and AIT. “These college freshmen up through seniors are a part of SOU’s ROTC program. They conduct weekly PT, attend Military Science courses, and stay on top of their own personal studies.”

Johnnie Mavaega (left) one of the five American Samoans who has benefited from a partnership between the Oregon Army National Guard (ORANG) and Southern Oregon University (SOU). [photo: courtesy]

Through being a part of the Oregon Army National Guard, tuition at SOU is covered in full. In addition to this benefit, the ROTC program offers housing scholarships, as long as participants maintain the program standards — and space is available.

“The first thing that caught my eye was how it would help me afford school. Joining the National Guard was my gateway to independence, I say that because now I don’t have to depend on my family to pay for college and it’s a really great feeling,” McMoore said.

Another perk of the ROTC program, according to SFC Hoddle, is the opportunity to compete for scholarships that help the student-soldiers financially. The cadets can apply for 2-year, 3-year, or 4-year scholarships which cover their college expenses for the respective number of years awarded. ROTC cadets also receive a stipend of $400 per month, $1,200 annually for books, plus E-5 drill pay on top of receiving 100% college tuition paid for by the National Guard.

PV2 Ulu will attend SOU and participate in ROTC in order to commission as a 2LT upon graduating college.

The partnership between ORANG and SOU started last February and has so far, been a success. For more information, contact SFC Hoddle via email at <sheri.l.hoddle.mil@mail.mil.>