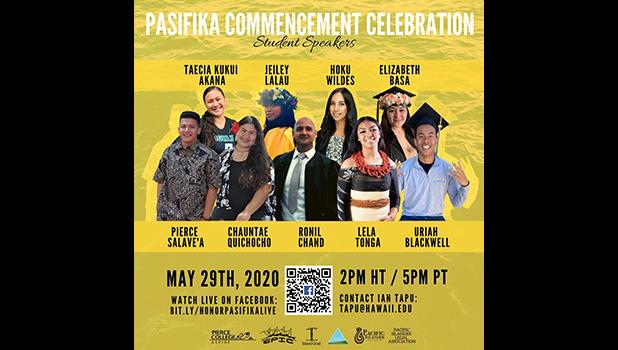 Honolulu, HAWAII — COVID-19 has transformed the way we engage with each other, and as a result, graduations have been cancelled across the country. Despite the pandemic, a dedicated group of Pacific Islander educators and professionals have come together to honor our graduates in a creative way and on a bigger platform and scale.

The first ever Pasifika (Pacific) Commencement Celebration will be streamed live on Facebook on Friday, May 29th at 1 PM Am Samoa time; 2 PM Hawaii time and 5 PM Pacific time. The event is honoring all Pacific Islander graduates from high school, college, and graduate school across the nation.

Although it was put together in a matter of three weeks, the commencement will feature Pacific Islander leaders and trailblazers including Veronica Pome'e (the first Tongan model featured on Sports Illustrated), Sienna Lalau (19-year old Samoan woman who has choreographed and danced for Ciara and Jennifer Lopez), and Professor Kapua Sproat (Director of Ka Huli Ao Center for Excellence in Native Hawaiian Law). We also have musical performances by Tenelle, Analea Brown, and the Tonga Sisters.

Most importantly, no commencement would be complete without hearing from the graduates themselves. We are featuring nine students including Pierce Salave'a who is graduating from Seattle Pacific University. While in school, he saw a need to better support Pacific Islanders and so he started the Pacific Islander Club of Cultural Arts (PICCA), which is one of the largest student organizations on campus. Representing high schools is Jeiley Lalau, a graduate of Mililani High School and whose family is from Poloa, Vaitogi, and Nu'uuli. These speakers will address the more than 200 students who registered for the event and who currently reside throughout the diaspora including from Samoa to the East Coast of the United States.

For these graduates and Pacific Islanders in general, graduation is no easy feat. In fact, according to the U.S. Department of Health and Human Services' Office of Minority Health Report, Native Hawaiians and Pacific Islanders (NHPI) trail behind non-Hispanic white population at every educational level. For example, 23.3 percent of NHPI have a bachelor's degree or higher as compared to 35.8 percent of whites. Additionally, 6.9 percent of NHPI have a graduate degree compared to 13.8 percent of whites.

According to co-organizer Ian Tapu, a graduate of University of Hawaii William S. Richardson School of Law and one of three Samoans in the entire program, "Despite the pandemic, this has given us the opportunity to bring together Pacific Islanders in all aspects of education. For so many students in the continental United States, finding a sense of place can be difficult far from home and in a community that doesn't reflect you. I know this first-hand being the only Samoan at the ivy-league school Dartmouth College in New Hampshire."

Additionally for Alika Masei, teacher and co-organizer and whose family is from Faga'alu, "This event is about bringing voice to our own people. So often we are overlooked, whether it is because of the size of our population or because of stereotypes and misperceptions, but this commencement is our way of affirming the next generation."