Vaccinations for those 16 and older — the general public — start tomorrow 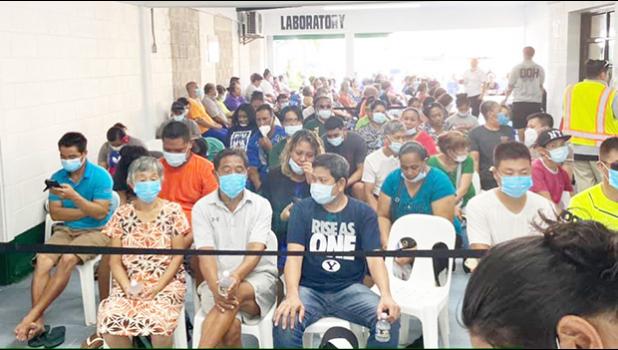 Pago Pago, AMERICAN SAMOA — Gov. Lemanu Peleti Palepoi Sialega Mauga “remains hopeful and optimistic” that repatriation flights “will be successful and that the Territory will maintain the least amount of COVID-19 cases globally.”

This is according to a statement from the Governor’s Office, provided to Samoa News early Tuesday evening this week responding to a request for comments or reaction from Lemanu over concerns raised by senators at last Thursday’s Senate Hospital/ Public Health Committee hearing regarding the launching of repatriation flights — with the first on Jan. 29th — to bring home local residents stranded in the U.S.

Lemanu is quoted in the statement — which the Governor’s Office said was released following the Senate committee hearing — saying that he was “confident” that the hearing provided the Senate the opportunity to ask any questions and voice their concerns.

Samoa News points out that among the concerns voiced by some senators is the starting of repatriation flights while the number of confirmed cases in the US continues to rise as does the death rate.

And even after the hearing, some senators still have reservations over the repatriation flight operation but will continue to monitor the situation based on any information released by the COVID-19 Task Force.

“I hold the Senate’s wisdom and faculties in the highest regard as the Elder Statesmen and women of our Country,” Lemanu said in the statement. “And I am hopeful that they now have enough information and the resources to understand what the repatriation process entails.”

“I believe that we have assembled a great group of public health doctors, medical doctors, and administrators both locally and in Hawaii, that have put together a very comprehensive response plan in bringing home our people,” the governor pointed out.

Lemanu said he is confident that the Task Force has collected and presented all the data, logistics, and analysis needed to build up the best repatriation plan possible.

“As a Territory, we must do our own due diligence in protecting ourselves. We should educate ourselves on how COVID19 is spread, and different ways to stay safe,” he said, adding that he and Lt. Gov. Talauega Eleasalo Va’alele Ale “encourage all our citizens to get vaccinated” for COVID-19.

DoH continues to post the daily vaccination schedule on its Facebook page as well as public announcements and urged the public to contact their office — 219 — for any questions.

Besides senators, the House also had concerns with the start of repatriation flights. (See separate story in today’s edition from the House committee hearing.)