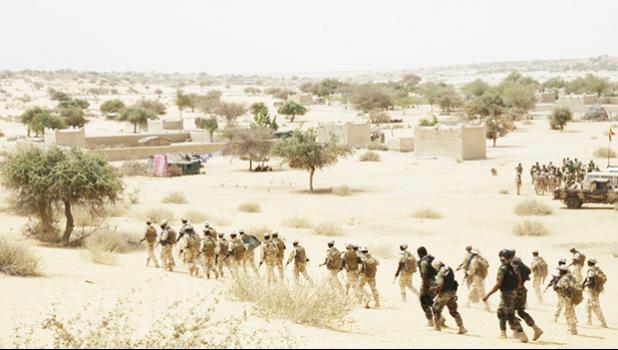 THE FACTS: The Defense Department says there’s no truth to claims in a viral story from writer E.T. Williams that Sgt. La David Johnson betrayed his fellow soldiers in an ambush that killed him and three of his comrades. Army Maj. Audricia Harris tells the AP that “at no point since the Niger attack has DOD ever considered Army Sgt. La David Johnson anything less than an honorable soldier who sacrificed his life for our country.” Officials say a claim in the story that a letter was found on Johnson in which he called President Donald Trump a “racist” is also false. Trump has defended his condolence call to Johnson’s widow in a public spat with the family and a Florida congresswoman who said the president was insensitive.

NOT REAL: The Air Force Just Disobeyed A Direct Order From President Trump, Tells Him No

THE FACTS: Soros’ Open Society Foundations weren’t banned by Austrian conservative leader Sebastian Kurz, and the foundations don’t even have offices in the country. A story from conspiracy-theorist site YourNewsWire includes numerous false quotes attributed to Kurz criticizing the Hungarian-born billionaire and liberal philanthropist, including one calling Soros “the greatest challenge humanity is facing.” A spokesman for the 31-year-old Kurz, whose party won an election earlier this month, tells the AP he never made the statements. A spokeswoman for Soros’ foundations told the AP the organizations have had no contact with Kurz.

NOT REAL: Doctors Urging People All Over The World To Stop Taking Ibuprofen Immediately, Here’s Why

THE FACTS: This article cited research from Cleveland Clinic cardiologist Steven Nissen backing changes on warning labels on nonsteroidal anti-inflammatory drugs — a category including ibuprofen — noting the medications could increase the chance of a heart attack or stroke. Nissen tells the AP he wasn’t interviewed by the blog, Culture Hook, and said the outlet inserted “comments” attributed to him that represent its own view. Nissen said in 2015, when the FDA made a change to warning labels, that NSAID use should be safe for those without cardiovascular issues. The blog changed its original headline of the story soon after the AP contacted Nissen. It now reads “Doctors Are Warning People About The Effects of Taking Ibuprofen for Pain Relief.”

NOT REAL: Cops Take A Knee Then Walk Out On Redskins Leaving Them Stranded In Their Locker Room Overnight

THE FACTS: The Washington Redskins weren’t forced to spend the night in the visiting team locker room at Philadelphia’s Lincoln Financial Field after their Monday night loss to the Eagles. A story that began circulating this week falsely claims Philadelphia police officers assigned to escorting the team took a knee instead and left the team on its own. A photo accompanying the story is actually a Philadelphia Inquirer picture of a city officer dancing at a parade. Police tell the AP the story is “fake.”

This is part of The Associated Press’ ongoing effort to fact-check misinformation that is shared widely online, including work with Facebook to identify and reduce the circulation of false stories on the platform.
END_OF_DOCUMENT_TOKEN_TO_BE_REPLACED