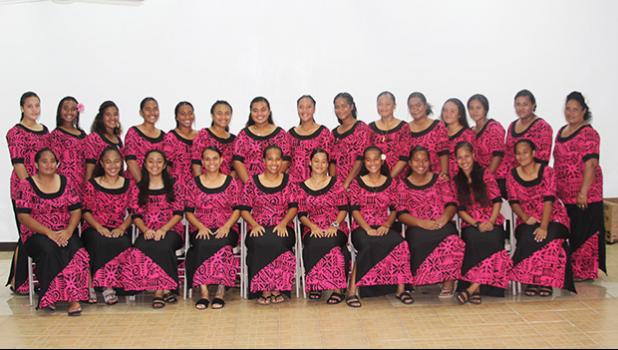 Pago Pago, AMERICAN SAMOA — The American Samoa women’s national team is very young, with an average age of 17 for the 21 players selected.

Three players were part of last year’s 2018 OFC Nation’s Cup qualifying team for American Samoa — Saono Enesi, Elcy Lui and Rayxena Foma’i.  Lela Waetin is another veteran with experience on the team, having played on the 2011 National Team during the Pacific Games hosted by New Caledonia.

Of the entire team, only three are over the age of 20.

“We have been training since the end of the girls’ high school season in February,” said head coach, Ati Faamau-Samuelu.  “It has been hard training for the girls but they have responded well to our instructions.”

Despite their young ages, the majority of them play in the FFAS National League.

The women are grouped with five other teams, including their sisters and hosts, Samoa.

“We are looking forward to seeing them perform on the field,” said the team’s head of delegation, Sandra Fruean, who also doubles as the association’s vice-president.

The other teams are Fiji, New Caledonia, Samoa and Solomon Islands.  The top team from the two pools will play in the gold medal game, while the second-best squads will vie for the bronze medal.

“They are the best players we have on island, and these players are the future of women’s soccer in American Samoa,” said FFAS president, Sen. Faiivae Iuli Alex Godinet.

The women’s schedule is as follows:

The women’s team will return home on July 16, arriving back home July 15.