Warriors overpower the Lions in a dominating victory 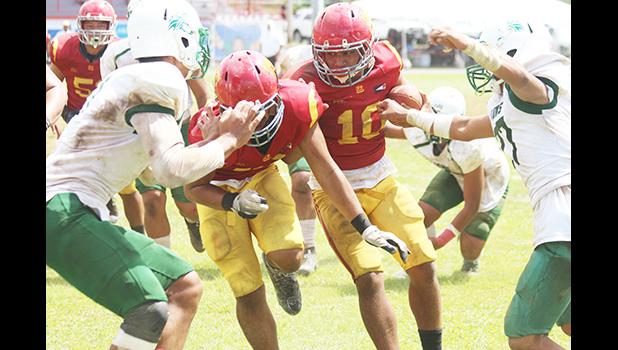 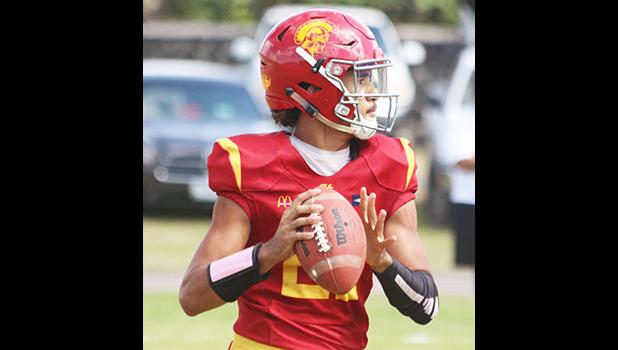 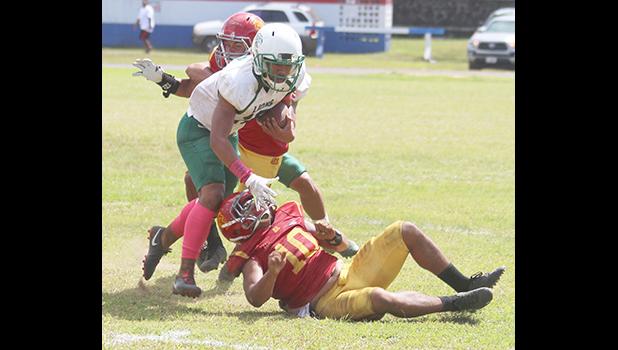 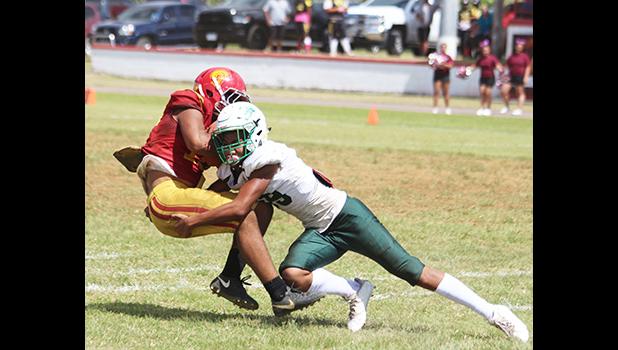 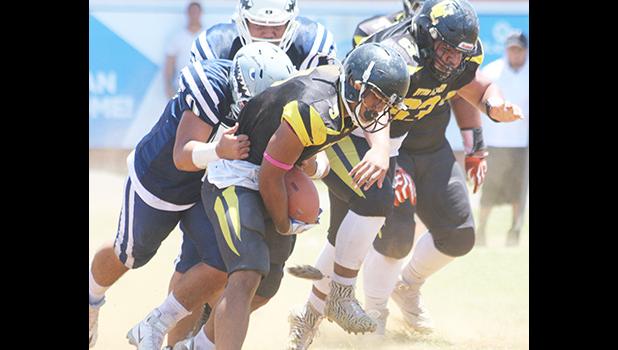 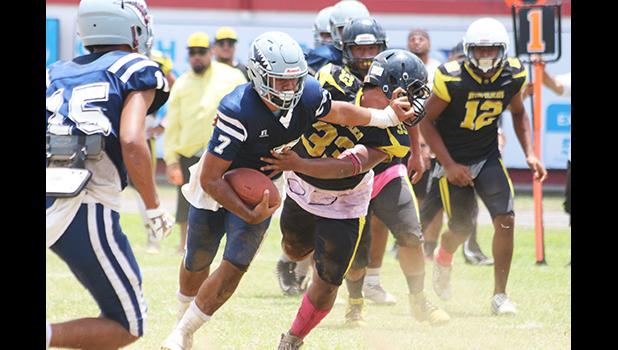 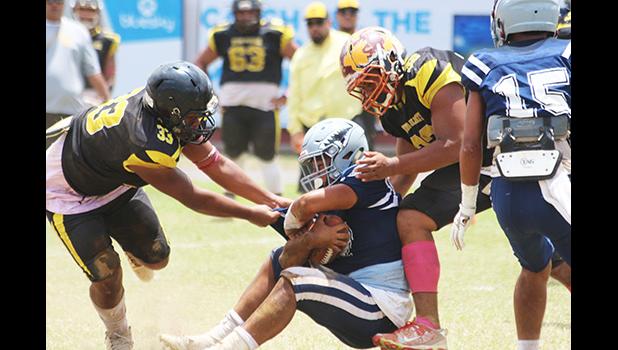 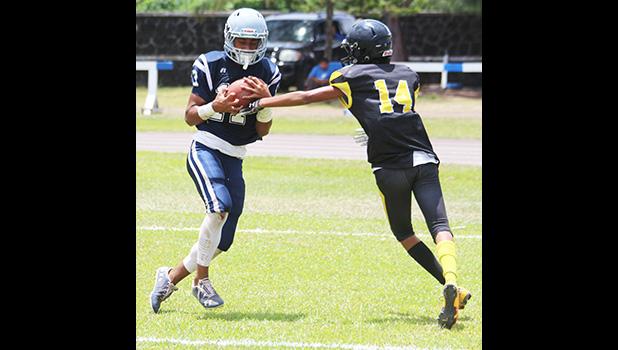 Sharks edge the Wildcats with a 10-point win
By
Tony Gasu
tony@samoanews.com

As the Tafuna varsity team preps to battle the only squad they lost to this season, the Vikings — who they will face this Saturday — their JV squad continues to dominate their division as the only undefeated team, after slaying the Lions last Thursday in a lopsided 34-0 win.

Meanwhile, the Blue Empire was stunned to see head coach Andrew Ena and his Wildcats showing up to compete — and indeed they did, giving the Sharks a run for their money.

Tafuna didn’t hesitate to put the ball in the air with Oakland Salave’a at the helm. The first 6 points came after Salave’a threw a perfect long pass to Isaiah Gurr who hauled it in. The two-point conversion had Salave’a faking out the Lions in a play action pass as he rolled out and threw a quick pass to Herman Sufia to put the Warriors in the lead with 8 points in the opening minutes.

Tafuna stuck with the passing game. After a couple of passes to Sufia to move the chains downfield, Salave’a changed up and went to John Allen for a 10-yard pass that was good for a Warriors second touchdown.

Salave’a hooked up with Sufia three times in the third quarter to score on three occasions, widening their lead. Just when the Warriors thought the Lions had given up, Fa’alili Fa’amoe and his squad responded, determined to put points on the board for the Lions.

After a couple of good passes to Joshua Ta’ani, Leone got an opportunity inside the red zone and they took advantage. Leone’s first down at the 1-yard line, and Fa’amoe runs it in to score the Lions’ first — and only — touchdown of the game, trailing the Warriors 6-34 with 1:38 remaining.

As the clock was winding down, Leone was penalized with a personal foul and this gave the Warriors a first down play at the 20-yard line. Salave’a sent Allen down the middle to score the final touchdown of the game.

The Blue Empire came into the game focused on stopping the Wildcats inside their own territory without passing midfield – a goal that was disrespected by the Wildcats when they not only stepped all over Sharks territory, but scored not once, not twice, but four times during their match up last Saturday morning.

Samoana’s offense drew first blood and sent a message to Nu’uuli when they scored their first 6 points in the opening minutes. The Sharks opened up with their famous ‘Air Attack’ and it was Avery Seumanutafa who moved the chains downfield. On Samoana’s first down at the 1-yard line, quarterback Tanielu ran the ball in for a touchdown. Tanielu’s field goal conversion was good and put Samoana up by 7.

Nu’uuli’s offense, led by quarterback Nathaniel Maea, was disappointed when they kept turning the ball over on fumble. With their defense hard at work, Samoana’s offense was excited to get back on the field and score another touchdown. Samoana’s third and goal possession from the 2-yard line, and Tanielu fakes a hand off to Marcus Samia, keeping the ball on an off-tackle play to score his second touchdown.

The two-point attempt was a fake field goal by Tanielu who ran the ball into the end zone, adding two more points for the Sharks — extending the lead 15-0 with 1:07 remaining in the first.

The Sharks stuck with the ‘Air Attack’ but were shocked when they saw an attempt to score in the end zone — a pass from Tanielu intended for Kobe Lefiti picked off by the Wildcats’ Calloway Alosio in the end zone and ruled a touchback. This brought Maea and Nu’uuli’s offense out to play a first down situation from their 20-yard line. Maea sent Joe Savaii straight up the middle — untouched — to score the Wildcats’ first touchdown.

Samoana couldn’t fathom what just happened so they switched to a running game, opting to go to Marcus Samia who had some good running possessions. The Sharks went back to the air attack and scored their third touchdown when Tanielu hooked up with Malaetasi Amisone on a 10-yard reception.

The two-point attempt was good, with King Moe ramming his way straight up the middle past the goal line to put the Sharks on top 28-6. Heading into halftime, the Wildcats spiced things up when Maea fired a long pass to Savaii on a 30-yard reception for Nu’uuli’s second touchdown.

Tanielu and his offense kept pursing their tun-n-gun strategy into the second half, trying to confuse Nu’uuli’s defensive unit. Late in the third quarter, Tanielu ran for a 35-yard reception to spot the Sharks a first down at the 1-yard line. From there, he sent Samia straight up the middle for Samoana’s final touchdown. The two point attempt was good.

The Wildcats offense improved drastically near the end of the first half. They continued to hold on to their momentum and kept scoring. Nu’uuli’s second down at their 10-yard line and Maea fires a long pass to Calloway Alosio to score a third touchdown. The two point attempt was muscled in by Savaii and brought the Wildcats up to trail 20-36.

Samoana’s defense got an earful from defensive coordinator Nofo Sualevai at halftime and it helped. Because they came back and sacked Maea in the backfield for a safety to put two more points on the board for the Sharks, who were now ahead 38-20.

In response, Nu’uuli’s offensive coordinator William Lobendahn engineered the perfect play to get the Wildcats back into the game. And it worked because Nuuuli scored another touchdown thereafter. And while they didn’t win, the Wildcats did not go down silently, evident in the final score, 28-38.