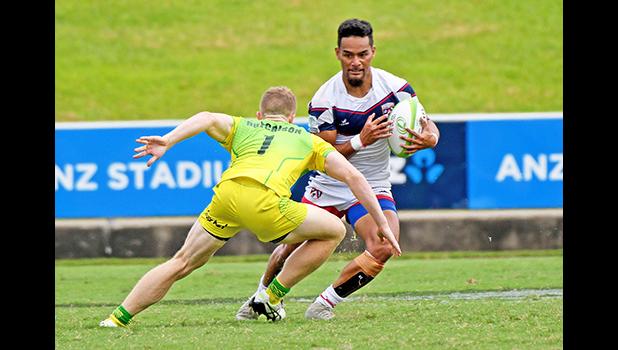 Suva, FIJI — The Talavalu was no match for the elite Aussies in their final pool game, Friday, November 8, 2019 Fiji time.

Coverage of the Oceania Sevens Championships is brought to you by Taupau Tauileave Toluono of Pentagon Samoa and its family of companies.

Some ball possessions were not secure enough, causing turnovers with our defense wearing themselves out. A yellow card also took Joseph Saitia Mano out due to a late tackle. Further, Winger Lolesio Lolesio was not part of the day’s lineup due to an injury from Thursday’s game.

Overall it was a very good experience for Talavalu going up against one of the highest ranking core teams in the tournament. Coach Tommy Elisara noted he was proud of his guys’ performance, saying that they gave it their all on the field. Talavalu is looking forward to capitalizing on today’s mistakes and using them to prepare for the Bowl semi-finals. Final Score: 66-0.

Talavalau is now the 3rd highest team in pool play and will be facing the 4th highest in pool play for the bowl semi-finals.

For this Samoa News photographer, seeing the American Samoa flag flying during international competition makes me remember the people who have sacrificed in the name of their sport to get American Samoa to where it is now.

It makes you think of the athletes who continue to sacrifice their time, physical health and money to train and play to have our  flag remain waving in sports tournaments around the world.

Further, it makes me hope that the same chance will be given to our younger generation by our Government and different sporting associations to be able to represent our islands of American Samoa in future competitions.

I still get teary-eyed: EVERY. SINGLE. TIME. God Bless American Samoa and all its athletes.

Parents, friends and supporters of the Talavalu in Fiji with the team a er the game with Australia. Talavalu is now the 3rd highest team in pool play and will be facing the 4th highest in pool play tomorrow for the bowl semi nals. Coverage of the Oceania Sevens Championships are brought to you by Taupau Tauileave Toluono of Pentagon Samoa and its family of companies. [Photo: Terry Custodio Auva’a] S • ALOHA BRIEFS & MORE