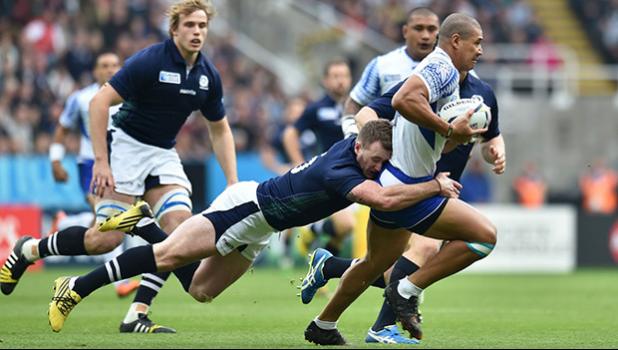 Kobe, JAPAN — Samoa's hopes of reaching the World Cup quarter-finals suffered a body blow on Monday when they were beaten 34-0 by Scotland but coach Steve Jackson says his side are still in with a shout of advancing from Pool A.

Scotland scored two tries in either half, the latter two coming when referee Pascal Gauzere judged Samoa had illegally impeded the Scots' progress to the line and awarded them two penalty tries.

Samoa, blanked in a World Cup game for the first time in 30 matches, also lost winger Ed Fidow to a red card after the referee pulled him up for being the offender in both incidents.

Jackson, barely audible at times due to the celebrations in the nearby Scottish dressing room, said his team's pride was dented.

"One changing room is singing and the other one is pretty sombre," he added. "They are hurting and so they should. No one likes losing and no one likes scoring zero."

The sending off of winger Fidow presents Samoa with fresh selection problems after the three-game bans handed out to centre Rey Lee-lo and hooker Motu Matu'u for high hits in the Russia game.